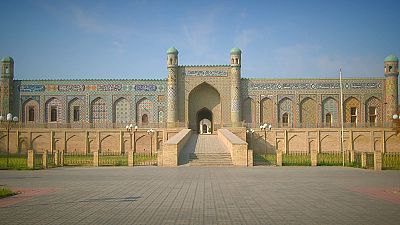 This week in Postcards we’re in the east of Uzbekistan in the city of Kokand.

The major attraction here is the Khudayar Khan Palace, once the largest in Central Asia and well known for its magnificent decorative features.

Euronews’ Seamus Kearney reported: “The palace was built between 1863 and 75 by the last khan of Kokand, which translates as ‘wonderful city’.

“Its palace was built on the ruins of previous citadels.”

Khudayar Khan Palace is stunning on the outside but visitors must also explore the inside courtyards and rooms, where opulence and majestic are some of the words that come to mind.

Madina Abdullayeva, who works at the palace, told Postcards. “In the old days there were 114 rooms and seven courtyards.”

“But nowadays if you’d like to visit our museum we’ve got 19 preserved rooms and four internal courtyards.”

Master craftsmen from the local region and as far afield as Bukhara were brought in to help construct the palace.

Today that intricate work is preserved with ongoing restoration.