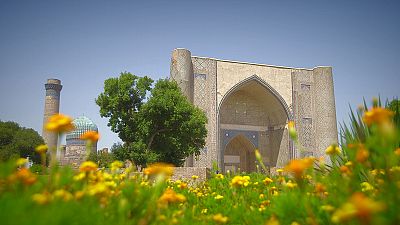 Join Seamus Kearney from the Euronews Postcards team as he takes us on a 360° tour of some of the main attractions in Uzbekistan. Get up close to some of the stunning monuments in the ancient cities of Khiva, Bukhara and Samarkand. There is also a tour of a colourful palace in the city of Kokand. With 360° footage of everything from the famous blue minarets and mosques, to Uzbekistan’s beautiful mosaic artwork, let us transport you back in time.

How do 360° videos work? You can explore the video on any computer or tablet by swiping or clicking the arrows to see all the way around or up and down. But the experience works best on a smartphone.

1.Uzbek city of Bukhara gets 360° treatment

A trip to Uzbekistan would not be the same without a visit to the beautiful city of Bukhara. This is where you can find the spectacular Poi-Kalyan complex and its wonderful courtyards. There are also the famous trading domes, not to mention the Sitorai Mokhi-Khosa Palace with its walls covered in mirrors. Seamus Kearney set up his 360° camera in some of the best spots in Bukhara.

2. Up close with dancers and models in Bukhara

Visitors to Bukhara get the chance to visit stunning ancient monuments but also explore the city’s rich history and culture. Inside the Nodir Divan-Beghi Madrassah, in the centre of the old city, traditional performances are held. Our 360° camera was set up inside the madrassah as dancers and models entertained guests sitting down for an evening meal.

3. Marvels of Khiva captured from all angles

The ancient city of Khiva in the west of Uzbekistan is a popular destination for tourists. Added to the UNESCO World Heritage List in 1990, the city is described as an open-air museum. Seamus Kearney shows us some of the best sights in the inner city, Itchan-Kala. Take a close 360° look at the famous blue minaret, a mosque, some of the impressive palaces, including Kunya Ark and Tosh Hovli, and also get a splendid view of Khiva from on high.

4. A walk around a stunning khan’s palace

The 360° camera is perfect for a tour of a palace that has multiple colourful rooms and courtyards. The Khudayar Khan Palace in the city of Kokand stands out for its intricate artwork and decorative features. Seamus Kearney helps us to explore the preserved rooms where the last khan of Kokand and his officials used to live and work. Also, don’t forget to look up at the ceilings, with their colourful motifs and decorations.

5.360° views of the wonders of Samarkand

Explore some of the most beautiful sights in Samarkand, Uzbekistan. We visit the famous Registan Square, with its majestic madrassahs, including the inside of the gilded Tilla-Kori dome. You can also see the city’s Bibi-Khanym mosque and the impressive Shakhi Zinda complex.
Postcards