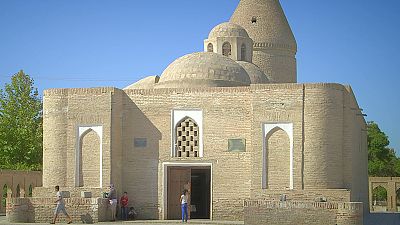 Our Postcard this week comes to you from one of the most sacred sites in the Uzbek city of Bukhara.

The Chashma Ayub mausoleum was built over a famous, ancient spring.

Euronews’ Seamus Kearney reported: “According to legend, this is where the biblical prophet Job struck the ground during a drought to make a spring appear.

“Many pilgrims come here to get a drink of the water that continues to flow.”

The name of the mausoleum actually translates as the “spring of Job” and many of the visitors who come here believe the water has special healing powers.

Feruza Khaitova, a local guide, told Postcards: “The first construction dates back to the 12th century and an unusual feature of the mausoleum is that it has a cone-shaped dome which is not typical for Bukhara architecture.”

And as well as being a sacred site there is also a museum, with explanations about the history of the local water systems.