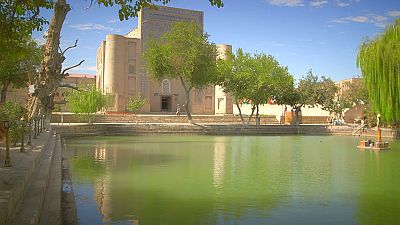 This week in Postcards we discover a peaceful oasis in the ancient Uzbek city of Bukhara.

The Lyabi-Hauz complex and its large artificial pond is a popular spot in the heart of the city.

Euronews’ Seamus Kearney reported: “In ancient times there used to be more than 100 ponds like this one scattered all around Bukhara.

“But today only a few remain, the perfect place to relax and socialise.”

Work on the complex began back in the 16th century and includes a tea house and several impressive Islamic monuments, including a large madrassah.

Dilshod Shamsidinov, a Bukhara guide, told Postcards: “All roads from 11 gates around the city led to Lyabi-Hauz and its tea house.

“In ancient times traders from many different countries gathered here in caravan serais.”

And reminders of those days gone by are still very much present at Lyabi-Hauz, where the tea house has continued to function as a busy restaurant.