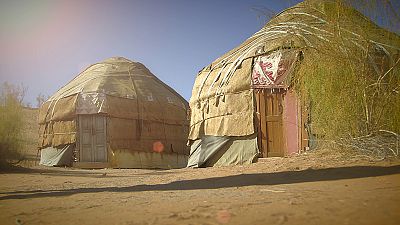 Our Postcard this week is from the desert in the east of Uzbekistan.

Lake Aydarkul is one of the places where visitors can have that feeling of getting away from it all.

Euronews’ Seamus Kearney reported: “A ride on a camel and a night in a yurt camp is a popular Uzbek travel experience, a chance to get a real taste of what life was like back in ancient times.”

An adventure into the desert is becoming increasingly popular, with the growing development of tourist operations.

In the middle of nowhere are small camps, with traditionally-made yurts that look exactly as they did in the old days.

And after a warm welcome, time seems to stand still.

Vahid Pirmatov from the camp Qizilqum Safari told Postcards: “We have 20 yurts in our camp, where guests can enjoy the nature and also taste the traditional national cuisine.”

The yurts are simple but cosy, decorated on the inside with handmade carpets and colourful fabrics.

And as the sun goes down, the atmosphere in the camp becomes even more enchanting.