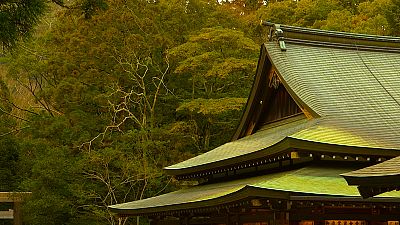 When you arrive at the Ise-Jingu shrine in Ise City, in Japan’s Mie prefecture, you know straight away that you are in a special place.

Any stress you may be feeling seems to dissipate as you walk towards the main gate; you find yourself simply letting go, immersed in the stunning nature, with only the sound of birds and a nearby river.

This is described as one of the most sacred locations in the country and is a hugely important site for the Shinto religion.

The priests here say this is Japan’s ‘spiritual home’ or the ‘soul of Japan’.

And that feeling of letting go is even more powerful when you cross the threshold into the sacred inner shrine known as Naiku.

You walk under an impressive Shinto gate on the Ujibashi Bridge, with the Isuzugawa River beneath you.

The priests here say the bridge, which is made out of Japanese cypress trees and zelkova, ‘separates the sacred realm from the daily world’.

Pilgrims to Ise-Jingu perform a purification ritual soon after they enter the site, washing their hands and rinsing their mouths at the water’s edge.

There is also a small building nearby with pools of water to carry out the same cleansing process.

An estimated seven million pilgrims and visitors flock to Ise-Jingu every year.

Ise-Jingu is actually said to be roughly the same size as the city of Paris and is home to some 125 Shinto shrines or jinja.

At Geku people give thanks to the deity of everyday things (clothing, food and housing), Toyo’uke-no-omikami, and Naiku is dedicated to the deity or goddess of the sun, Amaterasu-omikami.

Ise-Jingu, which means Grand Shrine, has been around for more than 2,000 years.

Amaterasu is actually the ancestral deity of the Imperial Family and is also known as the ‘tutelary’ deity of the nation.

In ancient times Amaterasu was worshipped in the Imperial Palace by successive Emperors of Japan.

But during the reign of the 11th Emperor, Suinin, Ise-Jingu was chosen as the place to enshrine and worship Amaterasu.

And it was in the reign of the 21st Emperor, Yuryaku, that the deity of everyday things, Toyo’uke, was enshrined at Ise-Jingu.

Japanese cedar and cypress trees abound at Ise-Jingu, with many of them hundreds of years old, and the site is surrounded by a national park.

What’s fascinating about Ise-Jingu is that everything you see in terms of the structures is only temporary.

Every 20 years, in accordance with Shinto tradition, all spiritually significant structures including the bridges, gates and temples are taken down and totally rebuilt.

This process symbolises the importance of renewal while at the same time having continuity.

The process of rebuilding is a ceremony known as Shikinen Sengu, which began in the year 690 during the reign of the 41st Emperor, Jito.

It takes about eight years for all of the Shikinen Sengu rituals and ceremonies to take place, including the moving of the coveted Holy Mirror, the symbol of Amaterasu.

Visitors to Ise-Jingu have plenty of chances to witness one of the ceremonies that take place, as more than 1500 are held annually.

For example, rituals are often held to pray for world peace, for the prosperity of the Imperial Family and the annual harvest.

One of the most important ceremonies is Kanname-sai, during which priests offer the first rice of the year harvested in Jingu and say prayers of gratitude to Amaterasu.

It actually isn’t possible to view the main sanctuary of Naiku, where the divine palace of Amaterasu is located, and cameras are not allowed.

Visitors are able to get close to some of the inner fences, but not even priests are allowed inside, except on very special occasions.

One part of the inner sanctuary is also only accessible to the Japanese Emperor.

As well as visiting the religious sites of Ise-Jingu, visitors can step back in time and visit some traditional streets.

Just outside the main entrance to Naiku is the famous Okage Yokocho district, where the feel of Ise in ancient times has been recreated.

There are many souvenirs and local arts and crafts, as well as the best of Ise products and food.

Cakes made out of rice and sweet beans are just one of the popular treats.

Traditional methods of cooking are maintained here, with the atmosphere said to reflect the Edo and Meiji periods.

As well as the quaint shops and the cafés, there are also visitor centres and museums, with valuable information about the shrines and local history.

While in Ise, the Ise-Shima National Park, which celebrates its 70 anniversary this year, has lots to offer for lovers of nature.

Ise Jingu: Telling Japan's story to the rest of the world https://t.co/c51XUDORjA

What a beautiful day at #isejingupic.twitter.com/Kl7zRRdCKl

Hear and see the #taiko drums beat at #OkageYokocho in #Ise over at the blog today! https://t.co/qMofRiYpw5pic.twitter.com/fqWe3uwIQq

Dubai’s recipe for a sustainable future