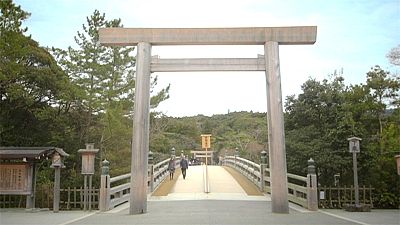 Our postcard this week comes to you from one of Japan’s most sacred places, the Ise-Jingu Shrine.

This large tranquil setting attracts millions of Shinto pilgrims and visitors every year.

Many rituals are performed here, including prayers for world happiness.

Euronews’ Seamus Kearney reported: “One of the incredible things about the shrine is that every 20 years all of the spiritually significant structures, including the temples, bridges and gates, are demolished and totally rebuilt.”

The next rebuilding ceremonies are set to begin in 2033.

Satoru Otowa, a priest at the Ise-Jingu Shrine, explained to Postcards why the site is so special.

“Ise-Jingu is said to be the spiritual home for the Japanese,” he said.

“As we have beautiful nature everywhere, surrounded by sea, rivers and mountains, the Gods live here.”

The site dates back more than 2,000 years and includes 125 Shinto shrines.

A large part is off limits to cameras and the public, and in one section only the Japanese Emperor has access.

A walk around the ‘spiritual home’ of the Japanese