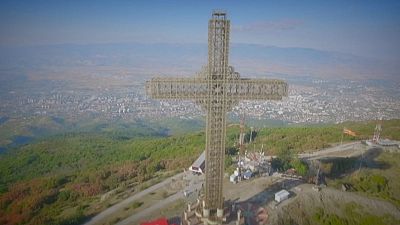 This week in Macedonian Postcards we’re back in the capital, Skopje, to check out the best place for a view over the city.

Vodno Mountain is a popular spot for visitors and it is home to one of the world’s highest Christian crosses.

The Millennium Cross stands at a height of 66 metres and was built to mark 2000 years of Christianity.

Euronews’ Seamus Kearney reported: “The view from up here is expected to get even higher.

“Engineers are currently building an elevator inside the cross, so visitors are able to almost climb to the top.”

A cable car brings people up the mountain, and joggers and cyclists also enjoy the surrounding nature.

Slobodan Lazarevski, a local surgeon and cycling enthusiast, told Postcards: “Every working day I ride my bike and come here to the top of Vodno because I enjoy the view and it’s a very good way to release my stress.”

An easy place to get to from the city, Vodno is perfect for those seeking an escape from the hustle and bustle of the capital.

An amazing view over Skopje