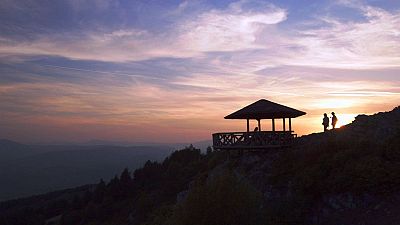 To really get a good feel for where you are when you visit Skopje, the Macedonian capital, you might want to head for the hills!

Vodno Mountain is a short drive away from the capital and there are views across the entire city and surrounding countryside.

If you time it right, Vodno is also a great place for sunrise and sunset photographs.

One of the main attractions on Vodno is the Millennium Cross, which is one of the highest Christian crosses in the world, and which can be seen from far and wide. It is also lit up at night.

The structure is 66 metres high, about the height of a 20-storey skyscraper, and was built to mark 2000 years of Christianity.

The cross was built on the highest point of Vodno, Krstovar peak, which means “site of the cross”. Local experts say there used to be a smaller cross there.

People in Skopje are also keen to point out that the cross is even higher than the Statue of Liberty in New York or the statue of Christ that overlooks Rio de Janeiro.

There are also plans to install an elevator inside the cross, to enable visitors to climb half way up.

Many locals and foreign visitors come to Vodno to enjoy the views, but also for sport.

Cyclists and joggers can be seen along the many trails and the area is a great place for a picnic.

There’s also an outside eating area and kiosk beneath the cross, with hot and cold drinks and snacks available.

Vodno is popular all year round, with more people in summer of course.

But locals say one of the best times to visit is in autumn, with the magical bright orange and yellow leaves.

The best way to get up Vodno is by cable car.

Opened in 2011, the line is 3.5 kilometres long and connects what is known as the mid-way point on Vodno to the place of the cross.