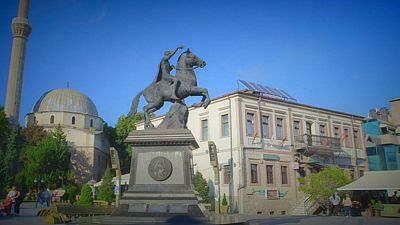 In this episode of Macedonian Postcards we’re in the southern city of Bitola.

People come here to see and be seen, and many cafés and restaurants serve the best of Macedonian culinary delights.

Euronews’ Seamus Kearney reported: “Eating fresh quality food is very important for Macedonians, and visitors should make sure they try the traditional dishes, including my favourites: the ones made with cheese from sheep.”

After enjoying other dishes of stuffed peppers, eggplants and beans, there is architecture to admire and shopping to be done along the street.

It has been a centre of fashion since the end of the 19th century.

Natasha Hristovska, a Bitola tour guide, told Euronews: “Two thousand shops were located here on the main street and Bitola was famous for many people to come here and to buy something, to be modern, and even today this trend is going through the years.”

And adding to the fashion status, there is even a saying in Bitola that some people never walk twice down Sirok Sokak Street on the same day without changing their clothes.

Bitola: from macchiatos to mosaics