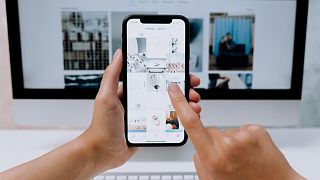 Russian tech entrepreneurs are set to launch a picture-sharing application on the domestic market to help fill the void left by Instagram, which the authorities blocked this week.

The new service, known as Rossgram, will launch on March 28 and have additional functions such as crowdfunding and paid access for some content, its website said on Wednesday.

"My partner Kirill Filimonov and our group of developers were already ready for this turn of events and decided not to miss the opportunity to create a Russian analogue of a popular social network beloved by our compatriots," Alexander Zobov, the initiative's public relations director, wrote on the VKontakte social network.

Russian state communications regulator Roskomnadzor blocked access to Instagram from Monday after its US owner Meta Platforms said last week it would allow social media users in Ukraine to post messages such as "Death to the Russian invaders".

Meta, which also owns Facebook, said the temporary change in its hate speech policy only applied to Ukraine after Russia's invasion, saying it would be wrong to prevent Ukrainians "expressing their resistance and fury at the invading military forces".

Meta said on Sunday it was narrowing its content moderation policy for Ukraine to prohibit calls for the death of a head of state.

Russia, which has already banned Facebook, has opened a criminal investigation against Meta and prosecutors asked a court to designate the U.S. tech giant an "extremist organisation".

The case is due in court on Monday.

According to a photo shared by Zobov on Vkontakte, Rossgram's colour scheme and layout will bear a strong resemblance to Instagram.

Meta did not immediately respond to a request for comment on Rossgram's design.

Russia has in recent months been developing its domestic technology, including AYYA T1 smartphones produced by state conglomerate Rostec.