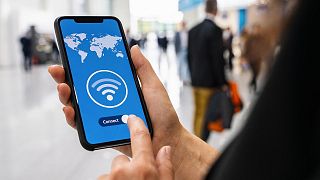 Demand for VPNs has been increasing amid mounting censorship in Russia. Interest has spiked following Instagram's ban.   -   Copyright  Canva
By Euronews and Reuters  •  Updated: 15/03/2022

Instagram access in Russia was cut from Monday in response to Meta's decision last week to allow social media users in Ukraine to post messages such as "Death to the Russian invaders".

The social media giant has since rowed back on that decision, announcing on Monday that calls for violence against Russian president Vladimir Putin and Russians, in general, were no longer permitted on its platforms.

On the eve of the Instagram ban, demand for Virtual Private Networks (VPNs) that encrypt data and obscure where a user is located spiked 2,088 per cent higher than the daily average demand in mid-February, data from monitoring firm Top10VPN showed.

VPNs are an encryption software that changes the user’s unique IP address, concealing where in the world their IP address is originating from.

They are increasingly being seen as a vital tool to keep channels to information from outside Russia open as the government continues to censor news about the war in Ukraine.

Russia has been targeted by unprecedented western sanctions over its actions in Ukraine and is battling to control the flow of information, stifling foreign social media firms with traffic slowdowns and, in the case of Facebook and Instagram, outright bans.

Demand for VPNs had already been on the rise in the region as Russian and Ukrainian websites fell victim to cyberattacks.

Top10VPN's data analysis of more than 6,000 entries to Russia's central registry of blocked websites found that 203 news sites and 97 foreign exchange and crypto sites are currently blocked in Russia.

State communications regulator Roskomnadzor on Monday said the number of cyberattacks against the IT systems and infrastructure of the Russian government had sharply increased since February 24.

It warned perpetrators that cyberattacks may lead to criminal consequences.

Russia tells YouTube to take down 'threats' against its citizens

These are Europe’s next 100 unicorns, according to VivaTech