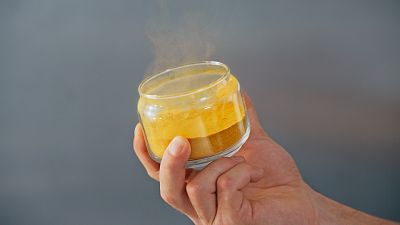 What if we could grow nutritious food, literally out of thin air?

As unlikely as it sounds, Finnish food-tech start-up, Solar Foods,says it has developed a process to do exactly that.

They’ve managed to grow a nutrient rich protein called solein, which is made from a single microbe using carbon dioxide - from the air - and hydrogen that is split from water using electricity.

Solar foods CEO, Pasi Vainikka, says the gas fermentation process used to create the protein is comparable in some ways to how you make beer or wine.

“Typically, for example, winemaking you add yeast to this sugarish liquid, and this yeast eats sugar for carbon and energy to grow and express some alcohol to surrounding liquid,” Vainikka explained.

“We do the same, but our microbe does not eat sugar, but it is hydrogen and carbon dioxide that we bubble in as gases in the fermenter. And that's where the very fundamental point is how to disconnect from agriculture. No agricultural feedstock is used."

If the technology is scalable, it could have far-reaching benefits for the future of our species both on Earth and in outer space.

Agriculture and related land use is a significant contributor to greenhouse gases worldwide and in 2018, was responsible for pumping 9.3 billion tonnes of carbon dioxide into the atmosphere , according to the UN Food and Agriculture Organization (FAO).

What we are doing scientifically, what intrigues the mind, is that you can integrate this kind of food production into the existing life support system in spaceships.

"The problem in the current food system is that about one third of the climate impact due to human action is due to what we eat, and about 80 per cent of that is due to animal production,” Vainikka said.

“So, we need to remove animals from the food supply system to a large extent. Solein (is) nutritionally similar to meat and meat like products, dairy products or milk. And that is what we want to replace."

The company’s pilot plant is currently powered by hydro power, but they're seeking to use a mix of hydro, wind and solar to boost their green credentials.

Solar Foods, which is backed by the Finnish Government, also saw their profile boosted when they were among the winners of the NASA Deep Space Food Challenge.

The competition asked innovators to create novel, game-changing food technologies or food systems that require minimal resources, which will be essential to sustaining human life if we become an interplanetary species.

"What we are doing scientifically, what intrigues the mind, is that you can integrate this kind of food production to the the existing life support system in spaceships," Vainikka said.

And, just like its microbe, Solar Foods is growing.

Construction of its first large-scale factory began at the end of 2021. It will be a hundred times larger than this pilot plant and is expected to produce four million Solein meals a year when it becomes operational in the first half of 2023.

Could sending muscle cells to space help us age well?