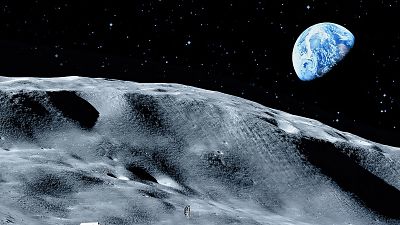 Over 50 years have passed since man first landed on the Moon, a feat that has remained an enduring symbol of human progress and technological ingenuity ever since.

But in the 21st century, private aerospace companies like SpaceX, Blue Origin and Virgin Galactic have thrown open the door to the real possibility of human beings becoming an interplanetary species.

Despite this century’s massive leaps in making space travel more affordable, there remain huge logistical challenges to making this dream a reality. Chief amongst these is the need to sustain spaceflight and extraterrestrial colonies with a locally-produced oxygen supply.

Oxygen is a hot commodity in space. It will be vital not only for potential human settlements to breathe, but also to enable the combustion processes needed to propel rockets to and from celestial bodies.

Nowadays, it’s often the case that 70 per cent of a rocket’s cargo consists of the oxygen needed to launch the spacecraft, which must be carried with it from Earth.

"One of the main challenges is the extraordinary cost of sending anything from Earth to the Moon," Jonathan Geifman, the co-founder of Israeli company Project Helios, told Euronews.

A stepping stone to Mars

His company is currently developing a system to extract and produce oxygen and metals from lunar soil.

"It's estimated in the area of $1 million (€832,951) per kilogram, so running the numbers, you can immediately understand that this is not sustainable economically. In the long run, we must be able to utilise and use resources on site," he added.

Project Helios, which is backed by the Israeli Energy Ministry and the Israel Space Agency (ISA), has developed an electrochemical reactor capable of extracting oxygen, metals and silicon from moon soil in order to enable the eventual establishment of a permanent lunar base.

And while getting humans to eventually establish a sustainable presence on the Moon is the aim of NASA’s Artemis programme, which was launched in 2017, the ultimate prize is sending a crewed mission to Mars.

It’s a goal that some, like Jeff Bezos, believe will not be possible without first establishing a lunar base.

"It’s an illusion that you can skip a step,” he added. "Skipping steps slows you down, it’s seductive but wrong".

In any case, sustaining life on the Moon or Mars will depend on the kind of technology that Project Helios is developing. So, how does the process work?

This process will work pretty well on the Moon, on Earth and on Mars, and actually probably any other planetary body or moon that has soil, sand or whatever on it.

Uses on Earth, the Moon and Mars

"Just like electrolysing water [where] you split hydrogen from oxygen, we're trying to do the same thing with molten lunar soil.

"This process will work pretty well on the Moon, on Earth and on Mars, Mars and actually probably any other planetary body or moon that has soil, sand or whatever on it".

While the company remains focused on their extraterrestrial ambitions, Geifman believes the technology they have developed could also be put to good use here on Earth.

He points to the high polluting arms trade as one example of an industry that could benefit from a more environmentally-sound method of metal production.

"Working on these technologies immediately puts us in a completely different frame that allows us to think of new ways of developing technology that must be super efficient environmentally," he said.

According to Geifman, Project Helios won the support of the Israeli Ministry of Energy precisely because they see the potential for a terrestrial application of the technology they are developing.

The challenge facing it - as is often the case for young companies - is scaling up the processes. This is the main focus of their work at the moment.

But Geifman is hopeful about the timeline for Project Helios’ technology to be up and running on the Moon.

"I think that… the most optimistic scenario - stars will align in the sky and everything will be just perfect and the whole value chain will function and work - that would be 10 years," he told Euronews.

"Thanks to the privatisation of the space industry, companies like SpaceX, it seems more reasonable than ever before. I mean, things are moving faster and faster. And I'm optimistic".