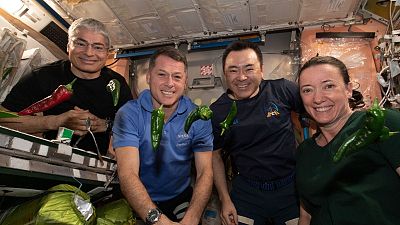 Did someone say space tacos? Astronauts aboard the International Space Station (ISS) have successfully grown extraterrestrial chilli peppers for the first time.

It was part of research carried out by NASA into growing crops in space since fruits and vegetables can supplement astronauts’ diet with Vitamin C and Vitamin K, key nutrients explorers will need during long-duration deep space missions in the future.

Other types of crops have been grown in space before but a chilli pepper presented a new challenge as they are more complex to grow due to the fact they need to be pollinated and because they take longer to grow than radishes or leafy greens.

To overcome those challenges, plant researchers on the ground used the more than 180 sensors and controls on the ISS’ Advanced Plant Habitat to closely monitor the peppers and precisely control the environment for optimal growing conditions.

With all the logistics involved in using the toilet in space, spicy tacos seem like a bold choice…

Robotic cats are being used to provide companionship to people with dementia in Florida.

Researchers from Florida Atlantic University gave the cats to participants in the study and found that they helped improve the mood and well-being of older adults with mild to moderate dementia.

They frequently observed study participants smiling and talking to their robotic cats and saying things like, “the cat is looking at me like someone who listens to me and loves me”.

The participants were informed that the cats were not real.

“Since there is no cure for dementia, our project offers a way to address symptoms naturally and without the use of pharmacological treatments, which may or may not be effective and have possible detrimental side effects,” said Bryanna Streit LaRose, lead author of the study.

The use of robotic animals meant there were no safety concerns for the animal or patients’ welfare.

“In the United States, one in three older adults dies with Alzheimer’s disease or a related dementia and there is currently no cure for the rapidly growing burden,” said Dr Safiya George, dean and professor at Christine E. Lynn College of Nursing.

“This therapeutic interactive pet intervention has proven to be a safe alternative method to improving mood and behavior in people with dementia who are attending an adult day center”.

Entire regions of Earth in flames. Storms trailing destruction in their wake. And the haunting fragility of humanity’s only home floating like a blue — but also tarnished — pearl in the vastness of space.

Through the portholes of the ISS, French astronaut Thomas Pesquet has an arresting view of global warming’s repercussions.

He used a video call from space to sound the alarm on Thursday, as world leaders, government officials and activists continued meeting at COP26 climate conference in Glasgow, Scotland.

“We see the pollution of rivers, atmospheric pollution, things like that. What really shocked me on this mission were extreme weather or climate phenomena,” Pesquet told French President Emmauel Macron during the call.

“We saw entire regions burning from the space station, in Canada, in California,” he said. “We saw all of California covered by a cloud of smoke and flames with the naked eye from 400 km up”.

From space, “the fragility of Earth is a shock,” Pesquet continued.

“It’s a sensory experience to see just how isolated we are as an oasis, with limited resources”.

This is Pesquet’s second mission to the space station. He also spent 197 days in orbit in 2016-2017. The destructive effects of human activity have become increasingly visible, he said.

“Year after year, we also know we are beating records for fires, for storms, for floods. And that is very, very visible. I very clearly saw the difference compared to my mission four or five years ago,” the astronaut said.

Macron said the goal for climate negotiators in Scotland must be to speed up humanity’s response.

“There is still a huge job ahead of us, and I think we are all aware of that,” the French leader said.

Meet the French astronaut who witnessed climate change from space