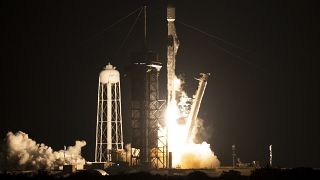 SpaceX’s Falcon 9 rocket will blast off into space on Tuesday with laboratory-grown muscle cells to try and better understand why and how humans age.

The study, called MicroAge, is being conducted by UK researchers from the University of Liverpool, who are seeking a better understanding of why muscles get weaker as people age to help combat the effects of ageing.

The rocket will be launched from the Kennedy Space Centre in Florida and end up on the International Space Station (ISS). The muscle cells will then go through several experiments in microgravity on the ISS.

The experiments are being carried out in space as astronauts’ muscles get weaker in space due to there being no gravity as there is no need to use extra tissue.

“Identification of the underlying mechanisms responsible for this loss of muscle mass and strength with age has been the subject of our research for a number of years,” said Professor Anne McArdle from the University of Liverpool’s Institute of Life Course and Medical Sciences.

“Astronauts in microgravity lose their muscle mass and strength at an accelerated rate compared with older people on earth, providing a unique model to rapidly determine the mechanisms underlying muscle loss not only in astronauts, but with relevance to older people on earth.”

The cells being sent to the ISS are about the size of a grain of rice. They will be placed into small 3D-printed holders and once they reach the ISS some of the 24 cells will be electrically stimulated to exercise. The other cells will be exposed to increased amounts of protective heat shock proteins, which the Liverpool team have previously shown provide protection against age-related muscle wasting.

"The team has had to work extremely hard over the last three years to overcome the many challenges of sending our science into space," said Professor Malcolm Jackson from the University of Liverpool.

He said the electronic equipment necessary to undertake these studies usually fills a large desk but we have managed to shrink this to the size of a pack of cards.

"This development work on automated and miniaturised systems represents an exciting innovation that could have a wider application in the future," Jackson added.

The UK company Kayser Space designed and built the scientific hardware to accommodate the muscle cells to ensure they survive the potential changes in temperature, vibration and g-force during launch.

The UK Space Agency has provided £1.2 million (€1.4 million) in funding to the University of Liverpool for the experiment.

The scientists at the University have travelled to the Kennedy Space Center to grow the muscle cells before launch.

Could making protein from 'thin air' be the food of the future?