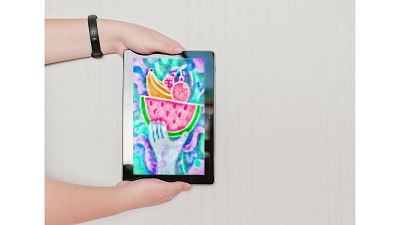 NFT digital art displayed on an I-pad   -   Copyright  Ava Labs
The opinions expressed in this article are those of the author and do not represent in any way the editorial position of Euronews.
By Jay Kurahashi-Sofue  •  Updated: 15/02/2022

There are countless ways people can use money to build wealth including savings, property and income-generating assets, to name a few. But as technology advances, the means of building wealth continuously improves and expands.

This is especially true in our society that demands instant gratification and a seamless experience with everything they do, especially when it involves money.

The recent rise in popularity of non-fungible tokens (NFTs) - which are digitally verifiable, unique assets secured by blockchains - has reignited excitement around money and its surrounding innovations.

At last a technological advancement that enables open, frictionless value transfers, while also providing an additional layer of utility to the owner that is tied to culture. The continued technological improvements of NFTs will lead to a future where wealth is preserved in culturally relevant items, while also building upon those items’ utility.

Decentralised applications allow people to use NFTs for more complex financial use cases and create a new paradigm of hyper-efficient use of people’s prised possessions. In the coming years, NFTs will become as ubiquitous as property and other physical wealth-preserving assets.

But, before we get to the future, it’s important to visit the past and understand how money and wealth creation has evolved throughout human history.

The history of money

Over 4,000 years ago, people of the Micronesian islands used early immutable systems for money called rai stones. Owners would set their rai stones, which weigh up to 4,000kg, within highly visible areas.

The ownership of these stones was passed down through history; therefore, signifying an early form of money where value was assigned through shared beliefs. Rai stones were predominantly used for large transactions and as a signal of wealth. It was not practical to use rai stones for everyday spending.

Many of NFT collectibles have been bought and sold for millions of dollars. People are setting these collectibles as their social media profile photos, bringing them to life with real-life interpretations, and even listing them for sale within the high arts space at Christie’s and Sotheby’s.

To improve access and utility of money, the Dutch East India Company introduced the first publicly traded stock in 1611.

Money now took on a different form, allowing people to participate in the potential upside of a corporation’s success.

The lack of regulatory oversight led to investors quickly buying stocks without proper due diligence. In 1720, fear plagued the markets, leading to a massive crash. Investors lost trust, and at the time, foreseeably all hope in the stock markets.

To gain trust back into the markets, twenty-four brokers and merchants came together on Wall Street to establish rules where the group would only trade with each other with pre-set commissions.

In 1792, this came to be known as the Buttonwood Agreement. Trust was now being re-established in the markets, and the increased trust eventually led to the formation of today’s modern equities markets.

From physical coins to notes representing shares in a company, money continued to transform into forms allowing people to build and preserve wealth in a variety of different ways. Property, stocks, and physical currency were a few of the primitives that enabled wealth preservation. These assets were commonplace before the advent of digital technology, ushering in new variations of capital.

Early primitives of money and other means of value accrual focused on portability and utility for a small subset of the world. The internet and its wide-scale adoption proved that systems could be made to handle the demands of the world. Built on top of the internet, electronic equities brought the work of the 'Buttonwood Agreement' to a global scale and improved access to capital for all.

Each product varied in risk and reward. There was promise in these global markets. But evidently, even just one bad actor could compromise the safety and security of the entire system.

In 2008, the United States housing market collapsed due to people defaulting on highly risky “junk” mortgages, which were incorrectly rated as “triple-A,” the highest rating possible for mortgages.

Renewing trust after the financial crisis

In the shadows of the financial crisis, Satoshi Nakamoto, the pseudonymous name behind Bitcoin, introduced a new global financial layer to reintroduce trust into the system by removing its very existence.

Blockchains are distributed ledgers where all participants can see what transactions are verified to be true. In doing so, these systems remove the need for intermediaries to facilitate activity. With Bitcoin, money could operate freely, providing anyone with access to the internet with financial services.

People no longer needed to rely on centralised third parties to transfer value. Equally as important, settlement times for transactions can now occur more quickly than say a wire transfer or money order.

If monetary history is any indication of the tenacity of human innovation, blockchain is not where things end. Bitcoin and subsequent payment-focused blockchains brought fungible tokens (tokens tradable with one another).

While NFTs are possible on these networks, the advent of smart contract-enabled blockchains has made NFTs rich, programmable assets and supercharged the creation of unique assets transferable on open, global networks.

Before NFTs, collectibles merely existed within smaller ecosystems. Physical baseball cards are difficult to trade and only hold value amongst other baseball card collectors. Similarly, collectibles issued online before blockchain could only be used within that specific network.

Now, these collectibles have value to anyone, as there is seamless price discovery and value that persists beyond niches. Blockchain-based baseball collectibles can now be traded for a celebrity’s digital collectibles, and vice versa.

Could NFTs be the wealth vehicle of the future?

NFTs have been in existence for years, but not until 2020 did they truly begin to command mainstream attention. Corporate brands, celebrities, and emerging artists can easily mint and promote their digital collectibles on a thriving, global market.

This doesn’t mean that there isn’t any risk in the market. But, what it does mean is that there is a larger addressable market for these collectibles than ever before. The explosion in popularity of NFT brands has validated the viability of this new asset class.

Bored Ape Yacht Club and CryptoPunks - scarce, digital collectibles focused around culturally relevant narratives indicate demand for culture to be used as capital. Many of these collectibles have been bought and sold for millions of dollars.

People are setting these collectibles as their social media profile photos, bringing them to life with real-life interpretations, and even listing them for sale within the high arts space at Christie's and Sotheby’s. And, this space is still just getting started.

People, today, are using these digitally verifiable collectibles as a means to preserve value. The more that individual NFTs get marketed beyond the context of blockchain, the more resilient this asset class becomes.

The next few years will be critical for NFTs as it needs to continue to prove its legitimacy, while the asset class demonstrates staying power through enhanced utility.

Early efforts, such as NFTfi are looking to achieve utility by allowing holders to secure crypto loans with the value of these assets. This behaviour resembles traditional mortgages, where material possessions and other investments are used as collateral.

In the future, many internet users will be able to easily access financial products that allow them to do more with their money. Free-flowing digital assets and web assets like NFTs will further minimise the inefficiencies within the financial system.

Those that can identify culturally relevant assets that persist over time will succeed in this evolving market.

This Russian exhibit is inviting visitors to meet their ‘digital twin'