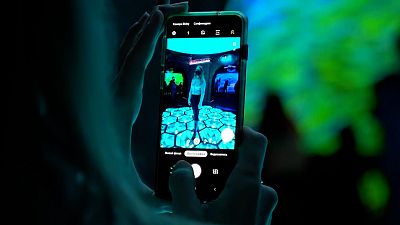 A visitor takes a photo inside a new exhibition entitled 'Digital Twins' in the Zifergauz gallery in St Petersburg, Russia.   -   Copyright  AP Photo
By AP  •  Updated: 02/11/2021

A new hi-tech exhibition in Russia is inviting visitors to meet their digital twin once they cross the threshold of St Petersburg’s Zifergauz gallery.

"Explaining simply what happens, there are cameras watching, but watching not with eyes, they can't see like you and me.” Maxim Zhestov, the digital media artist behind the project, explained.

“They can see a number of points, and send several millions of small voxels, three-dimensional pixels per second. Therefore, they can feel the space around and create volumetric objects which are near them," he added.

With a wave of their hand, visitors can send colourful waves along the walls of the gallery or launch a whirlwind of digital cubes.

The exhibit is accompanied by three installations from the permanent exhibition, including an artwork called "Kaleidoscope," which imitates the illuminated fountains of the Grand Palace of Peterhof in St Petersburg. It responds to visitors' steps.

Organisers say the music played in the gallery was created by a neural network and is available on streaming platforms.

The free exhibit runs until November 30.