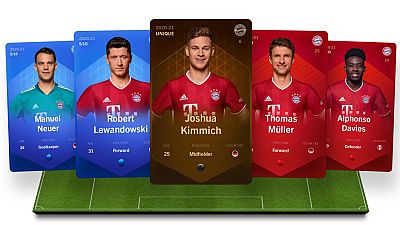 A fantasy football game that sees players collect and trade non-fungible tokens (NFTs) of their favourite players is now France's most valuable start-up.

Paris-based Sorare raised $680 million (€580 million) in a funding round led by Japanese conglomerate Softbank, setting a European record for series B funding in the process.

The investment values the company at over €3.6 billion.

Founded in 2018, Sorare is a fantasy football game where players buy and sell cards featuring real-life footballers. Each card is registered as an NFT on the Ethereum blockchain, which acts as a certificate of its authenticity.

Players can also build their own fantasy team of five Sorare NFT cards and compete in tournaments for money - paid out in the form of the cryptocurrency Ether. The performance of a given card is related to the real life performance of the footballer it features, adding an element of financial risk to trading the NFTs.

The cards are all officially licensed, with major European clubs like Paris Saint-Germain, Real Madrid and Premier League side Liverpool signing up.

Not every card on Sorare is created equal. Every season, 1,000 limited cards as well as 100 rare, 10 super rare and just a single unique NFT are minted for each footballer in the game.

This creates a secondary market where players buy and sell the NFT cards, whose value fluctuates in line with demand and a footballer's real-life performance - put simply, rarer cards featuring star players like France forward Kylian Mbappé or Manchester United's Christiano Ronaldo will be worth more.

And that's where more financial risk comes in. The value of Sorare's NFTs can go down as well as up, with real-world factors like a footballer's performance or future prospects impacting the value of their NFT.

Sorare is the largest sports-based NFT platform by sales volume, according to NonFungible.com, a website that tracks NFT market data.

NFT sales on Sorare have totalled more than €128 million since January this year. The platform's most expensive unique card features Cristiano Ronaldo and was bought for €245,072 in March.

"We saw the immense potential that blockchain and NFTs brought to unlock a new way for football clubs, footballers, and their fans to experience a deeper connection with each other," said Nicolas Julia, CEO and co-founder of Sorare.

"We believe this is a huge opportunity to create the next sports entertainment giant," he said.

Clubs cash in on crypto

Earlier this month Spanish football's top flight La Liga signed a deal with Sorare to bring the league's clubs to the platform. It followed similar moves by other international leagues including the German Bundesliga as well as Japan's J1 League, which were tempted onto the platform by the revenue the NFTs generate.

In August, Argentine star Lionel Messi received a "welcome package" worth some €30 million after moving from Barcelona to the French side PSG.

Fan tokens are a type of cryptocurrency that allows holders to vote on mostly minor decisions related to their clubs. Among the clubs to launch tokens this year are English Premier League champions Manchester City and Italy's AC Milan.

Like Bitcoin and other digital currencies, fan tokens can be traded on exchanges. They also have a tendency towards wild price swings, leading some financial regulators to issue warnings to investors.