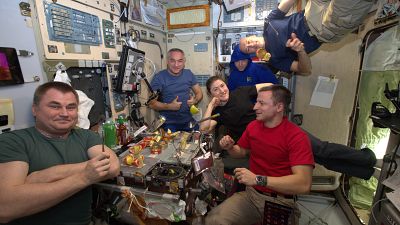 Euronews space correspondent and European Space Agency (ESA) astronaut Luca Parmitano has sent the latest installment of Space Chronicles, a series in which he documents his experiences on the International Space Station (ISS) over a six-month period.

They were joined by a new member - Hazzaa Al-Mansoori from the Arab Emirates was welcomed onboard the International Space Station (ISS).

Luca Parmitano, European Space Agency (ESA) Astronaut said, "It's also a cultural experience for all of us. Today we had an amazing lunch of specialties from the United Arab Emirates that were brought up in a space format just for us."

"Having space food written in Arabic on board was a really welcome addition to the cuisine on board," added Morgan, "Because we have space food from so many different countries. We have Italian food, we have French food, we have Japanese food, Russian food, American food. And now we're adding to the mix, food from the Middle East - for the first time."

"And we were able to enjoy that all together. All nine of us around one table. It's a terrific experience, like you said. Sharing food, there's nothing like shared food to share in a cultural experience and bonding, camaraderie among the crew," said Morgan.

You can follow his time onboard the ISS exclusively on Euronews and Euronews.com.

Testing times for the human guinea pigs on ISS