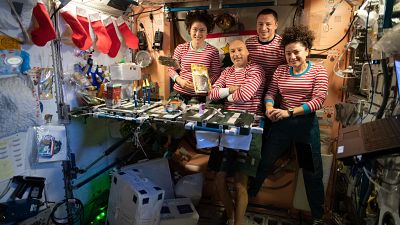 While much of the world was celebrating Christmas and the New Year, it was business as usual for astronauts aboard the International Space Station.

European astronaut Luca Parmitano said if anything it was more busy than usual.

In recent weeks the astronauts have been preparing to release Dragon 19, the Space X vehicle that will bring back to Earth all of the samples that have been studied on the space station for the past couple of months.

They packed Dragon with all these samples, which had to be kept frozen or cold during the trip back to Earth.

The reusable Dragon supply ship concluded its 30-day stay at the space station, splashing down in the Pacific Ocean southwest of Los Angeles on January 7.

Parmitano said the samples would be retrieved by ground crews “and distributed to all the different payload centres, and to their principal investigators for further study”.

Still, it wasn’t all work and no play for the Space Station crew, Parmitano said.

“On Christmas Eve, we all joined together, and we had a very nice event where we actually celebrated the birthday of Oleg Skripochka, one of my Russian crewmates — and so it was a different way to celebrate Christmas Eve, because it turned into a big birthday party.

“New Year's Eve was a lot more interesting, because of course we all come from different countries, and what better chance to celebrate New Year's in different times?

“We celebrated the first New Year's on Moscow time — and we sang and celebrated as we could. And then around 11 o'clock, when it was midnight in Italy, which is obvious sly my country, I celebrated for the Italian New Year's, and then at midnight GMT, we celebrated onboard the space station.

“So it was really interesting, a very good way to say hello to 2020 and this new decade.”

In collaboration with the European Space Agency (ESA)

Ask Our astronaut | Do astronauts get any privacy in space?

Is the aging process the same In space?