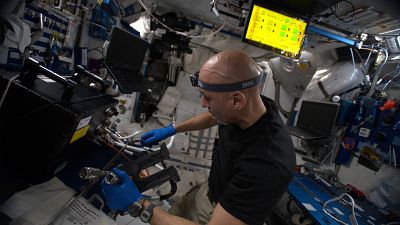 Astronauts on the International Space Station have been involved in hundreds of experiments since the first long-term residents arrived in November 2000. And in many cases, the astronauts themselves become human guinea pigs.

Euronews space correspondent and European Space Agency astronaut Luca Parmitano is currently keeping tabs on his diet as part of an experiment called NutrISS, combining the words nutrition and ISS.

“I have a special application on my tablet so that I can log everything I eat for a period of five days," Parmitano explained. "Then we can do very fine measures of my body mass and figure out whether I am in a balance, I am in a deficit, or I'm overeating. And then from the ground they can suggest ways for me to improve my diet.”

Parmitano says the research could have benefits for nutrition back on Earth.

He’s also taking part in an experiment to test how astronauts’ perception of time changes in space.

This is the second time that Parmitano has visited the ISS. On his first mission, he spent 166 days in orbit and took part in two spacewalks.

You can follow his time on board the ISS exclusively on Euronews and Euronews.com.

Find out why the crew have been busy