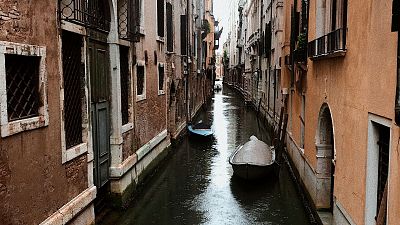 Many wouldn’t dare to go for a dip in the Seine in Paris, the Thames in London, or the Spree River in central Berlin, even in the summer heat. Europe’s main cities are struggling to keep untreated sewage out of their waterways, and the impacts of climate change are making matters worse.

A new EU-funded project is trying to fix the issue that has been long in the making.

In the middle of the 19th century, a horrible smell plagued London. Human and industrial waste had been emptied directly into the Thames for years. The city didn’t have an adequate sewage system at the time. The scorching summer of 1858 made the smell of the river unbearable, and what is known today as “The Great Stink” urged politicians to act.

Parliament eventually approved massive public investments to build a new, more modern sewage network, which collects stormwater and wastewater in one joint system. This so-called combined sewage system became a blueprint for many other European countries that modernised their wastewater infrastructure in the following years.

Today, London and many other major cities like Paris, Berlin, or Sofia still rely on their ageing wastewater systems.

We can use digital technologies to improve water quality to a level that is safe for swimming.

“During heavy rainfall, pipes need to handle a bigger flow of water than usual. When the influx is too big, the sewers overflow and release untreated wastewater into nearby waterways,” urban water management specialist, Nicolas Caradot, explains.

Caradot is the lead coordinator for digital-water.city, an EU-funded research project that unites scientists in Berlin, Sofia, Milan, Copenhagen, and Paris. The researchers use digital technologies to improve water quality to a level that would be safe for swimming and adapt Europe’s sewage systems to the biggest challenge of the 21st century - climate change.

“Overflows of wastewater into rivers are happening more often as extreme weather events such as heavy rains are becoming more frequent,” says Caradot. Sewer overflows usually go unnoticed by the public, although they are a major source of water pollution and harmful to the environment.

The recent deadly floods in Germany and Belgium, however, were a stark reminder of the vulnerability of Europe’s water infrastructure. The historic rainfall damaged and polluted drinking water systems, leaving thousands without clean water.

Sewer overflows usually go unnoticed by the public, although they are a major source of water pollution.

“European urban water systems urgently need another modernisation wave like the one which followed ‘The Great Stink’,” says Caradot. The European federation of national associations of water services (EUREAU) estimates that countries in the EU would need to double their annual €45 billion investment in water infrastructure if they wanted to make their wastewater systems more resilient to the impacts of climate change and clean up their rivers.

Replacing the existing combined sewage systems with new ones that collect wastewater and stormwater in separate pipes isn’t an option in many historical cities, like Sofia or Paris, as works would be too costly and very difficult to implement. So digital-water.city is developing technological solutions to improve the management and modernise existing systems. The kind of challenges scientists face often depends on the local conditions.

In Bulgaria’s capital, Sofia, the sewer system forms a massive underground labyrinth. At 211 different locations, untreated wastewater can be released into the Iskar River and its tributaries when the pipes are overflowing. The river’s water quality is suffering substantially from the pollution during storms. But before the problem can be fixed, city officials need to know what exactly is happening underneath Sofia’s pavements when it rains.

A team of researchers and innovators is now developing and testing new temperature sensors to better monitor the impact of overflowing sewers.

This information helps sewer operators to have a better understanding of the sewage system both during dry and wet weather, so city officials learn where to start fixing Sofia’s underground labyrinth.

A different kind of sensor technology could soon not only fight water pollution but also make swimming in some urban rivers a reality – again.

Parisians were allowed to swim in the Seine River until 1923 when bathing was banned over health and safety concerns. Today, most sewage is treated in wastewater plants before being discharged into the river. However, occasional overflows of raw wastewater still happen after heavy rainfall, which is why bathing is still prohibited as a precaution.

Researchers are working on a solution that could reconnect Parisians with their river and enable open water swimming competitions in the Seine and Marne River during the 2024 Summer Olympics and Paralympics.

Researchers are working on a solution that could reconnect Parisians with their river.

A sensor placed inside a bright orange buoy takes water samples and measures their bacterial concentration while floating in the water.

Since the measurements are carried out immediately instead of losing time by transporting the samples to a lab, authorities can anticipate and prevent pollution peaks.

Based on the data collected, the Berlin Centre of Competence for Water and the local Ile-de-France public sanitation service SIAAP are currently developing a tool using machine learning to predict water quality. This software will eventually be integrated into a mobile application that will inform users in real-time when the river is clean enough for a swim.

This software will be integrated into a mobile application that will inform users in real-time when the river is clean enough for a swim.

If the app and the technology it is based on turn out to be a success, swimming in urban waterways could soon be a reality in many European cities, says the project’s coordinator Nicolas Caradot.

And in Paris, Olympic athletes could compete safely in the 10 km freestyle and triathlon events – 100 years after the city’s river was declared too dirty for bathing.