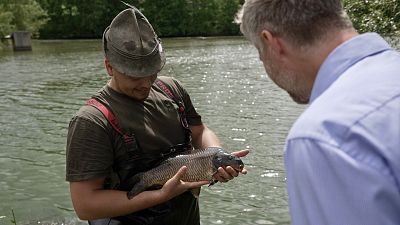 When one first thinks of aquaculture, what springs to mind is the image of farming fish in a cage, and all the environmental concerns associated with this method. But across the European Union, there are many communities that have practiced a traditional form of aquaculture for centuries, that not only provide a healthy local source of protein, but also functions in a way that is beneficial to the environment, biodiversity, and local communities.

When properly managed, certain forms of aquaculture, such as the farming of molluscs, production in ponds and wetlands, and the farming of algae and other invertebrates, can provide many ‘services’ to the ecosystem, including maintaining and restoring them and their biodiversity, and the absorption of excess nutrients and organic matter from the environment.

Vladimír Žlábek is the director of CENAKVA (South Bohemian Research Center of Aquaculture and Biodiversity of Hydrocenoses) in the Czech Republic, where fish have been raised in ponds since the Middle Ages. This way of low-density fish farming, known as extensive aquaculture, can be particularly valuable for the local ecosystem.

‘Extensive aquaculture is a way of producing fish in which you don't have full control over the process. You just release them into the environment and try to use the resources which are freely available in nature.

But there are also other services which these ponds provide. It's not only that we can have fish in them. For example, they can also prevent flooding. They retain water when we have enough of it, and then release it continuously to the environment.

It also balances the micro-climate around us. It provides moisture during the warm and hot days of the summer.

It increases the biodiversity and provides a living space for various organisms which need water and which we wouldn't have here otherwise.

Fishermen make these ponds, they maintain them, and manage the water. The fish which are there are part of the ecosystem, and we need them there. Otherwise, sooner or later, the ponds would get full of mud, plants, and we would lose them. And if the fishermen do not maintain them, we would lose them, because no one would else would be interested in keeping them in a good condition. But we don't want this. We want them in a balance — the fish production and the other services."