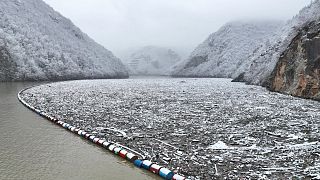 Unseasonably hot weather in Eastern Europe is taking its toll on the region's rivers.

Temperatures over 20C are “simply extraordinary” in mid-January, according to meteorologists. But for the last several days, countries including Ukraine, Romania, Moldova and Turkey have seen record-breaking heat.

Combined with heavy rain, the warm spell has triggered dangerous flooding across the Balkans.

Two men died last week after they were swept away by the swollen Raška river in southwestern Serbia.

“This was stronger than all of us. We couldn't defend some parts,” the mayor of Raška town Nemanja Popovic told Reuters.

A number of roads have also been submerged after rivers in northern Hungary broke their banks, displacing thousands of people

"January used to be a cold month when there was snow, and we used to have floods only in March," said Gabor Jona, mayor of Josvafo village near the Slovakian border.

In Bosnia and Herzegovina, the downpours have left an iconic river choked with rubbish.

The Drina river, revered by rafters for its emerald colour and the stunning route it cuts through the mountains, has been polluted with waste from riverside landfills.

Plastic bottles, rusty barrels, old tyres and even the odd fridge freezer covered the width of the river outside the town of Visegrád.

The waste has accumulated behind a barrier built by a Bosnian hydroelectric plant a few kilometres upstream.

"We had a lot of rainfall and torrential floods in recent days and a huge inflow of water from [the Drina's tributaries in] Montenegro which is now, fortunately, subsiding,” said Dejan Furtula, of the environmental group Eko Centar Visegrad.

"Unfortunately, the huge inflow of garbage has not ceased."

Some 10,000 cubic metres of waste are estimated to have amassed behind the Drina River trash barrier in recent days, Furtula said and could take up to six months to clear.

Rivers in Montenegro, Albania and Kosovo have also burst their banks

Floods were also reported on Friday in parts of Kosovo, where the Ibar River and other, smaller waterways and streams overflowed, endangering homes and cutting off local roads.

Around 50 families were forced to evacuate in northern and western Kosovo with authorities deploying security forces with trucks and boats to help.

Though the rainfall eased in Albania, vast areas of farmland remained underwater and some remote villages were cut off for a third day on Friday.

Some national roads were temporarily blocked, including the main highway link to neighbouring Kosovo.

A number of regions in Albania were left without power, either from damage or because authorities switched off the electricity for security reasons.

Some areas in both Kosovo and southern Serbia were also left without drinking water.

Bosnian authorities said that after several days of flood alerts, they expect the situation to calm. Rains were followed by snowfall on Friday which also blanketed the capital, Sarajevo, along with Serbia's capital, Belgrade, and other regional cities for the first time this winter.

The EU countries using the most (and least) renewable energy