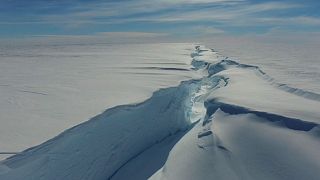 Chasm-1 - the crack in the Brunt ice sheet - remained dormant for many years but has now created a new iceberg.   -   Copyright  British Antarctic Survey
By Charlotte Elton  with AP and AFP  •  Updated: 25/01/2023

A vast iceberg equivalent to the size of Greater London has broken off the Antarctic ice shelf.

The huge iceberg - which measures more than 1,550 square kilometres - broke away from the 150 metre thick Brunt Ice Shelf on Sunday.

The good news is that the split is a natural process known as ‘calving,’ and is not linked to climate change, the British Antarctic Survey say.

The new berg is the second iceberg to break off in two years, as a massive crack called ‘Chasm-1’ extends through the Brunt ice shelf.

The icy mass is likely to drift into the Weddell Sea. It will be named later by the US National Ice Center.

Why has this massive iceberg broken off Antarctica?

The Chasm-1 crack has been forming for a few years - as evidenced by striking footage from 2019.

Such cracks are common around the edges of Antarctica, explains Professor Dominic Hodgson, a glaciologist for the British Antarctic Survey.

“The ice shelves around Antarctica are extensions, floating extensions, of the Antarctic ice sheet. So they do periodically extend out to sea and then break off.

“This one has been doing that for a number of years now.”

Perhaps surprisingly, the event is not linked to climate change, Hogson says.

"Some of the ice shelves that are broken up in more northerly locations are the result of climate change. But this one is further south. And it's worse. It's well below freezing there,” he explains.

"So it's not linked to any changes in atmospheric or ocean temperatures. The reason it's important, it's a very large calving event for Antarctica.”

The British Antarctic Survey recently moved their station inland. If they hadn’t done so, it would currently be floating out to sea on the new iceberg.

This breakage isn’t linked to climate change - but it’s the exception, not the rule.

Meltwater from these sheets is responsible for about one-third of the global average rise in sea level since 1993.

The melt problem is evident all over the world. Switzerland’s 1,400 glaciers have shrunk by more than half in the last 85 years, while Arctic sea ice has decreased by about 40 per cent since 1978. Glaciers in the Himalayas could disappear by as early as 2035.

The best way to mitigate these losses is to rapidly decarbonise and limit global heating.