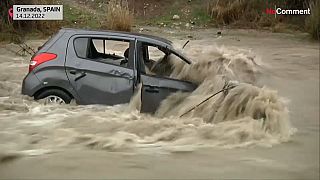 The Spanish region of Extremadura has suffered the worst consequences of the Efrain storm.

The Spanish region of Extremadura has suffered the worst consequences of the Efrain storm.

But it hasn't been the only region affected. In Granada, in the Andalusia region, the Dílar river has washed away several vehicles and left many stranded.

A flood like never seen before in 40 years destroyed more than 50 homes.

In Coria, in Cáceres, the river overflowed as it continued to rain.

A tense calm reigns, according to emergency services, who say that the worst is now over.