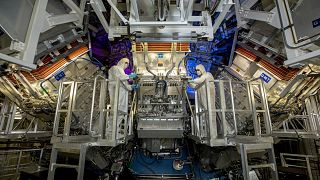 Scientists in the US have just announced a major breakthrough in fusion energy.

The first nuclear fusion experiment to achieve a net energy gain has been carried out by scientists at the Lawrence Livermore National Library in California.

This has been described as the holy grail of nuclear fusion research since the 1950s. No group so far has been able to produce more energy than is consumed by the reaction - until now.

"That is creating more energy from fusion reactions than the energy used to start the process. It's the first time it has ever been done in a laboratory anywhere in the world."

"This is one of the most impressive scientific feats of the 21st century," Granholm added.

Under secretary for nuclear security Jill Hruby said that the US has taken "the first tentative steps towards a clean energy source that could revolutionise the world."

How did the lab produce energy from nuclear fusion?

The $3.5 billion (€3.3 billion) experiment in California puts the elements deuterium and tritium into a capsule smaller than a pea. It then fires a 192-beam laser which heats and compresses the fuel, simulating the conditions of the inside of a star.

This intense heat and pressure cause the capsule to implode, and the hydrogen atoms to fuse and produce energy.

Though the experiment has been carried out hundreds of times before, last week for the first time, the fuel stayed hot enough, dense enough and round enough that it ignited. It produced more energy than the lasers had deposited - about two megajoules in and three megajoules out.

"The science and technology challenges on the path to fusion energy are daunting but making the seemingly impossible, possible is when we are at our very best," said Kim Budil, director of the Lawrence Livermore National Library.

"Ignition is the first step, a truly monumental one, that sets the stage for a transformational decade in high energy density science and fusion research and I cannot wait to see where it takes us."

How long will it be before nuclear fusion can produce usable energy?

Around the world, huge amounts of money have been spent on trying to develop nuclear fusion into a viable alternative to other more polluting sources of energy.

Its proponents say it could power millions of homes without producing carbon emissions or hazardous nuclear waste.

While the recent breakthrough is an incredible scientific achievement, Budil said that it would take "probably decades" before it could create energy we can actually use.

The lab in the US uses one of the largest lasers in the world and the process requires materials that are difficult to produce. The equipment needed to turn energy produced from fusion into electricity that can be deployed to the grid also hasn’t been developed yet.

But, Budil added, "with a concerted effort and investment, a few decades of research on the underlying technologies could put us in a position to build a power plant."