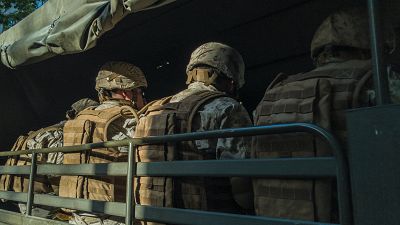 The top military spenders, which include Britain, the US and France, also emit the most greenhouse gases.   -   Copyright  Diego Gonzalez   -
By Rebecca Ann Hughes  •  Updated: 18/11/2022

The world’s wealthiest nations are spending 30 times more on military power than on tackling the climate crisis, according to a new report.

That’s compared to an estimated $243.9 billion (€235.28bn) on climate finance for the world’s most vulnerable countries.

“Military spending and arms sales have a deep and lasting impact on the capacity to address the climate crisis,” the TNI wrote in their report.

The world’s 23 wealthiest nations are spending 30 times as much on their armed forces as on climate finance for the countries most affected by climate change, according to the Transnational Institute (TNI) who conducted the research.

Military spending has increased by 21.3% since 2013, the Amsterdam-based think tank reported.

The group claimed that financing armed forces is damaging the environment as well as draining the resources to fight the climate crisis.

“Every dollar spent on the military not only increases greenhouse gas emissions,” the group wrote in their study.

“But also diverts financial resources, skills and attention away from tackling one of the greatest existential threats humanity has ever experienced.”

The top military spenders, which include Britain, the US and France, also emit the most greenhouse gases.

How is the war in Ukraine affect the climate crisis?

Germany has announced an extra $104 billion (€100bn) in arms spending while, in June, the Norwegian government suspended climate finance while the conflict in Ukraine continues.

The TNI published their research as COP27 got underway in Egypt, a country “much better known for its military spending than for its climate action," said the think tank.

The group reported that between 2017 and 2021, Egypt was one of the top five arms-importing countries, supplied mainly by Russia, France and Italy.

"Faced with the climate crisis and the signs of reaching dangerous planetary tipping points, there is an overriding imperative to prioritise climate action and international cooperation to protect those who will be most affected," the TNI report said.

"Yet in 2022, an arms race is exacerbating the climate crisis and preventing its resolution."