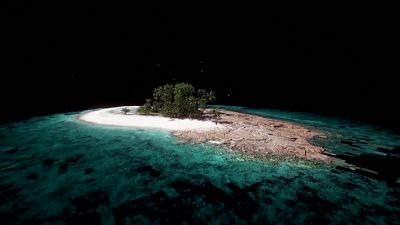 The Pacific island nation of Tuvalu has long been a cause célèbre for the risks of climate change.

Located nearly halfway between Australia and Hawaii, the archipelago of nine islands, which are home to 12,000 residents, is actively threatened by rising sea levels.

Up to 40 per cent of its capital is underwater at high tide, and according to the starkest estimates yet, the entire Pacific nation is forecast to be entirely underwater by the end of the century.

Simon Kofe, Tuvalu’s foreign minister, has now announced its plan to become the first digitised nation in the metaverse, an online realm that uses augmented and virtual reality to help users interact.

Last year, Kofe urged global leaders to “take bold and alternative action today to secure tomorrow” at the COP26 climate summit while standing knee-deep in the sea to illustrate how Tuvalu is on the front line of climate change.

The minister explained that the country had to take matters into its own hands - which includes creating a virtual version of the country in the metaverse - since his message at last year’s summit wasn’t heeded by the world.

"Since COP26, the world has not acted and so we in the Pacific have had to act. We've had to take our own precautionary steps with a Future Now project. As our land disappears, we have no choice but to become the world's first digital nation," he said, addressing COP27 last week from the digital twin of the real Te Afualiku islet.

Islands like this one won't survive rapid temperature increases, rising sea levels, and droughts. So we'll recreate them virtually.

Te Afualiku, he said, is likely to be one of the first spots in Tuvalu to be submerged by rising sea levels.

The video ends with a simulation of the islet in the metaverse, suggesting how the virtual copy of the country would look.

"Our land, our ocean, our culture, are the most precious assets of our people. And to keep them safe from harm, no matter what happens in the physical world, we'll move them to the cloud," he said.

"Islands like this one won't survive rapid temperature increases, rising sea levels, and droughts. So we'll recreate them virtually. Piece by piece we’ll preserve our country, provide solace to our people and remind our children and our grandchildren what our home once was".

Kofe warned that it might be inevitable for other countries to join the metaverse as their lands disappear.

"We must start doing so [taking action] today. Otherwise, within a lifetime, Tuvalu will only exist here," he said.

Tuvalu will be the first country to replicate itself in the metaverse. The city of Seoul and the island nation of Barbados are following suit. Last year, they both said would enter the metaverse to provide administrative and consular services, respectively.