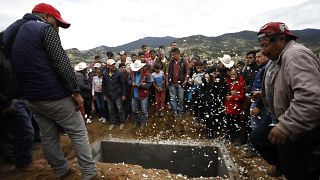 Family and friends grieve around the grave of anti-logging activist Homero Gomez Gonzalez in Ocampo, Michoacan state, Mexico.   -   Copyright  Rebecca Blackwell/Copyright 2020 The Associated Press. All rights reserved.
The opinions expressed in this article are those of the author and do not represent in any way the editorial position of Euronews.
By Jodie Ginsberg  •  Updated: 18/02/2022

Jodie Ginsberg is CEO of the European affiliate of Internews, an international nonprofit that supports independent media in 100 countries around the world. Here she gives us her take on the importance of solution-focused environmental journalism - and why it can save lives.

Climate reporting has gone from being a niche beat in most national and international media, to a story that dominates almost all global headlines. Yet the stories from the communities who are bearing the brunt of the climate crisis still remain underfunded and often dangerous to undertake.

It’s the human-interest stories that offer a real insight into the impact of the current climate crises, and in some cases can provide solutions.

Stories like the rising salt levels in the waters in Bangladesh driving up blood pressure and reproductive health problems, the Nepalese village wiped out by floods, and the farmers in Ghana battling both drought and flooding. In the battle to galvanise public support, as well as political will, for tackling climate change, it is these stories – and the voices of those most impacted by climate change that we need to hear more of.

“Stories about how we can make practical positive change demonstrate to people who feel overwhelmed by the sheer scale of the challenge that something can be done now, that will make a difference,” says Joydeep Gupta, South Asia director at the Third Pole, an environmental news website focusing on the Himalayan region and South Asia.

‘Solutions journalism’ as it is often called is rapidly growing in prominence, especially in those communities experiencing the most severe impacts of climate change. It’s also a method of reporting that could prove more successful than the more alarmist stories readers traditionally associate with climate reporting.

It’s a method of reporting that could prove more successful than the more alarmist stories readers traditionally associate with climate reporting.

In Assam, India, houses have been destroyed due to the heavy rainfall. Numerous stories and research done into the levels of rainfall in the area resulted in new homes being built on stilts from cross-bracing bamboo that supports a structure capable of withstanding floods and earthquakes.

Godrej Group, the Indian multinational conglomerate, and SEEDS have agreed to fund the construction of 80 of these houses within the next year.

Another example of climate journalism providing solutions happened in Colombia when plans for a highly controversial road through the Amazon were halted after an investigation found they would severely damage the local ecosystem. It was thanks to the work of Colombian Journalist Andrés Bermudez Lievano.

Bridging the gap between science and public understanding

Journalists play an essential role in bridging the gap between often complex scientific information and data and the general public, helping both to expose and explain issues. Crucially, they can also help address the wealth of mis- and dis-information that swirls around the question of climate change, an issue that even businesses urged leaders to address at this year’s COP26.

They said misinformation was hindering progress towards sustainability goals.

Journalists can help address the wealth of mis- and dis-information that swirls around the question of climate change.

To put this in context: there were an estimated 3,800 journalists at this year’s COP, yet some countries most impacted by climate change only had a single journalist reporting on the conversations and representing the interest of their communities. The largest contingent of reporters from low- and middle-income countries at COP was roughly 30 - less than 1 per cent of reporters at the event.

That needs to change.

Despite climate journalists providing solutions throughout their work, it’s these very people who in some cases are underfunded and under contact threat. Over the past decade, at least 30 environmental reporters are estimated to have been killed for their work, according to the Committee to Protect Journalists.

We need to be doing more – as media support organisations, as news outlets, as funders, as governments – to support, protect and elevate the journalists on the frontlines of environment reporting. They are an essential tool in the arsenal against climate change.