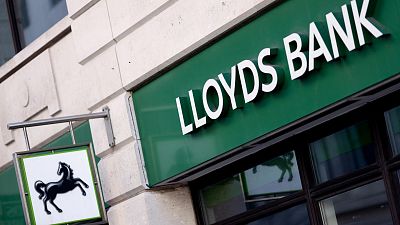 Lloyds Bank has updated its climate policy to reduce funding for oil and gas.   -   Copyright  REUTERS/Tom Nicholson   -
By Euronews Green  with Reuters  •  Updated: 25/10/2022

Lloyds, Britain's biggest domestic bank, has announced it will not finance new oil and gas fields.

Financial firms around the world are increasingly pledging to help fight climate change, but most have yet to put firm plans in place. Lloyds joins a small number of other lenders reducing funding for fossil fuels, including NatWest, which cut lending to clients in the oil and gas sector by 21 per cent in 2021.

Lloyds updated its climate policy to make the change, which bars project financing or reserve-based lending to greenfield oil and gas projects. However, the policy still allows general lending to companies in the industry.

Although the bank's exposure to the sector is small, the move reflects growing pressure on financial institutions to back low-carbon initiatives ahead of the COP27 climate talks in Egypt next month.

It also comes just weeks after Britain pledged to give a green light for fresh exploration in the North Sea as energy supply is threatened by the conflict in Ukraine.

Other lenders that have tightened oil and gas policies recently include Dutch bank ING and French lender La Banque Postale.

Will other banks stop financing oil and gas?

Climate groups welcomed the Lloyds move and called on other British banks to follow suit.

"By becoming the first of the five largest UK high street banks to stop the direct financing of new gas, oil and coal projects, Lloyds is making a clear statement on the future of financing for fossil fuel expansion."

Lloyds' exposure to dirty industries is smaller than some of its global rivals, given its focus on Britain's economy.

The bank provided about 1 billion pounds (€1.15 billion) of finance to commercial oil and gas customers last year, according to its latest climate disclosures report, and the sector accounted for just 0.2 per cent of its overall lending.

Over in the United States, political pressure ensures most large lenders continue to finance oil and gas expansion, despite concern from climate campaigners.