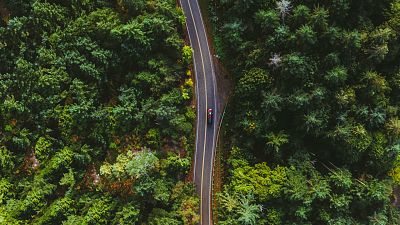 A green initiative launched by the award-winning music festival has been adopted by the Serbian government after a public call for mass reforestation throughout the country. Entitled Green Я:Evolution the initiative plans to increase Serbia’s forest cover by nearly 50%.

CEO and founder of EXIT, Dušan Kovačević, tells Euronews Living, “we hope to see the universities and high schools, army and police personnel, all joining the thousands of volunteers” in planting billions of trees over the years to come.

"However, our true aim is a global one - we want to do our part in building a worldwide coalition that will bring Earth forestation from 30 to 40% of the total planet land surface,” he says. “This could be one of the key factors in order to reach global goal for Net Zero Co2 emissions by 2050."

EXIT is one of the biggest music festivals in Europe, having had 200,000 people in attendance last year. It originated as a youth movement for peace and freedom in Serbia and the Balkans twenty years ago.

The music festival is committed to leading the charge when it comes to sustainability. This year, live streaming of concerts will allow those who couldn’t attend to enjoy the music at home, and footage will be interspersed with environmental videos and messages. Audiences watching all over the world will also be able to donate to chosen eco organisations via the stream, entitled Life Stream.

Prime Minister Ana Brnabić states that Serbia is “committed” to fighting the climate crisis and, with support from EU partners, hopes “to accomplish this very ambitious goal.”

EXIT holds a global reputation for Electronic Dance Music (EDM) and has won the Best Major Festival award at the European Festivals Awards twice. This year, the 2020 anniversary edition will host some of the biggest names yet, including David Guetta, James Arthur, Fatboy Slim and Metronomy. It will take place from the 9th – 12th July at the Petrovaradin Fortress in Novi Sad.

While EXIT festival claims reforestation has been scientifically proven to be the simplest and most effective response to climate change, some would argue that it’s not enough. According to a [2](A green initiative launched by the award-winning music festival has been adopted by the Serbian government after a public call)019 IPCC report on land use, planting trees may not be the most efficient solution. Evidently, trees do a great job at sequestering carbon from the air, but they don’t last forever, so it could be more beneficial to invest in forms of land that endure for longer. The report suggests focusing on peatlands and marshlands for example, areas filled with rotted plant matter which act as carbon sinks.

Swampy marshland is in fact the largest natural carbon store, and has the ability to trap carbon for centuries, says the IPCC. As such, calls for peatlands to be included in global conservation plans are increasing, as they essentially “store carbon in perpetuity."

The Global Landscapes Forum (GLF) leads the way in promoting peatland, as the world's largest knowledge-led platform on sustainable land use. In a recent tweet, it maintains, “peatlands hold more than twice as much carbon as the world’s forests do.”

How has Serbia already been affected by climate change?

According to a risk profile on Serbia by Climate Links the past two decades have brought record levels of drought, floods and exceptionally harsh winter. This has impacted the economy substantially, particularly the agricultural sector, and has even caused deaths in some cases.

Climate change projections indicate that Serbia and the Western Balkans face continuing temperature increases in future. In order to combat this, the Serbian Ministry of Agriculture and Environmental Protection created a Climate Change Committee in 2014 and a climate strategy and action plan is currently underway. This will address issues from agriculture and forestry to water management. Prime minister Brnabić recently announced that Serbia needs to invest 15 billion euros in environmental projects by the end of the year.

The United Nations Development Programme (UNDP) reports that extreme weather in Serbia means “for those who make their living off the land and sea, climate change is forcing a new reality.”

On the ground, solutions could mean breeding indigenous species who can adapt and survive the effects of climate change for longer. Building more dams will protect the area from future flooding and increasing energy efficiency in public buildings or adopting more renewable energy sources, like biomass, could help in urban areas like the capital city Belgrade.