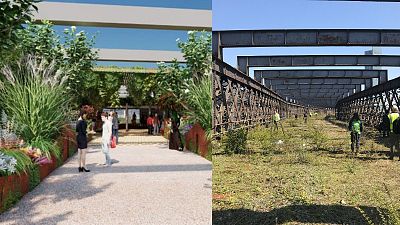 An abandoned Victorian-era viaduct in Manchester is getting a green upgrade.

The Grade II-listed Castlefield Viaduct, in the heart of the northern English city, will be opened as a temporary nature haven next summer, in a style reminiscent of New York City’s ‘High Line’.

The 330m-long viaduct sits in one of the oldest parts of Manchester. The steel and cast iron bridge was once used to transport coal in and out of the northern city, until it closed in 1969.

But it is now set to undergo a modern and eco upgrade, promising a new natural oasis for Mancunians.

The pilot project is part of a National Trust project, with a concept by Twelve Architects.

“We’re delighted to be starting this project to bring new life to the viaduct, establishing its place in this vibrant area of the city,” says Duncan Laird, Head of Urban Places at the National Trust, which aims to address the inequalities in access to green space in and around urban areas.

“Our ambition is to give more people the opportunity to enjoy the health and wellbeing benefits of green, nature-rich havens on this remarkable heritage structure in the city.”

What can you do at the viaduct?

There will be a welcome area, which includes a food truck and places to sit and enjoy the space.

But in the second part, visitors will see a green screen with a ‘living wall’ obstructing the view of the viaduct. The green screen ‘gate’ then opens to reveal a stretch of the viaduct. A guide will then take you through to another zone that has minimal architecture and landscaping, showcasing the viaduct and inviting people to imagine a potential for future projects.

And then a third zone will feature the garden oasis, filled with plants, but there will also be nods to the viaduct’s heritage.

The space will also have a growing area and ‘Partner Plots’ where city partners can exhibit their own features, from art installations to a curated display from museum partners or community showcases.

Providing the city with a greenery

“In the brief, we were tasked to create “moments of joy” and that is what we have sought to achieve with the preliminary design ideas,” explains Matt Cartwright, founding director at Twelve Architects. "We want to encourage visitors to discover and enjoy what will be a distinctive green space.

“It should pay homage to the classic industrial structure which has shaped this area’s history while enhancing Manchester’s current and future vibrancy.”

The temporary park and pilot is set to open in the summer of next year. Feedback from the public will help with the vision for the permanent regeneration of the viaduct.

The plans are similar to that on New York’s ‘High Line’, which is built on a historic rail line. It was opened in 2009 as a space where visitors can experience nature, art and design.

How eco-friendly are Europe's urban parks?