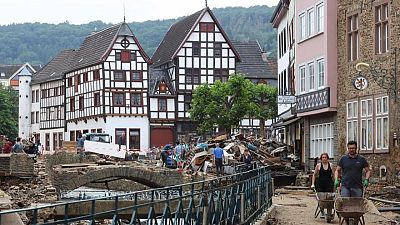 As the waters recede, officials are assessing the destruction left by the torrents that terrorised swathes of western and southern Germany, Belgium and the Netherlands, smashing buildings and bridges and killing more than 180 people.

German Interior Minister Horst Seehofer, who visited the spa town of Bad Neuenahr-Ahrweiler on Monday, said the cost of reconstruction would run into the billions of euros, in addition to the millions needed for emergency assistance.

But the cost of designing and building better infrastructure to mitigate such events could be many times higher.

Coming hard on the heels of severe heatwaves and wildfires in North America and Siberia, the floods have put climate change at the top of the political agenda.

The European Union this month launched an ambitious package of measures to address climate change at source, focusing on reducing greenhouse gas emissions to limit the relentless rise in the global temperature.

It is also implementing a €750 billion coronavirus recovery package that is heavily weighted towards projects that boost economic resilience and sustainability.

But the devastation wrought by last week's floods has made clear that the extreme weather events predicted by climate change scientists are already happening now, and require a direct response.

"It is a gigantic task. This is the hour of the engineers."

After a series of severe flooding events over the past 25 years, some of the affected countries had already taken action, for instance by lowering floodplains to help them absorb more water.

At the same time, the speed and scale of the disaster, caused by exceptionally heavy rain drawn together by a powerful low-pressure system, showed just how hard it will be to prepare for more frequent extreme weather.

"As climate change continues, as extreme events continue to increase in intensity and frequency, there are just limits to the extent to which you can protect yourself," said Wim Thiery, a climate scientist at Vrije Universiteit Brussel.

Drastic cuts in greenhouse gas emissions are certainly necessary, but will not substantially influence the weather, let alone cool the planet, for decades.

Long before then, countries will have to adapt or build basic infrastructure that goes beyond water management into agriculture, transport, energy and housing.

Even before last week's floods, which turned high streets and houses into piles of muddy rubble, Germany's vaunted transport and urban infrastructure had been deteriorating as a result of years of budget restraint.

In other vulnerable areas of Europe, such as northern Italy, destructive floods expose the weakness of decrepit roads and bridges almost every year.

And the coronavirus epidemic has left governments with even less spare cash to spend on maintaining their infrastructure, let alone strengthening it.

But they may have no choice.

"I think we all realise now that those extreme events are really happening," said Patrick Willems, professor in water engineering at Belgium's KU Leuven University.

"It's not just the forecast, it's really happening."