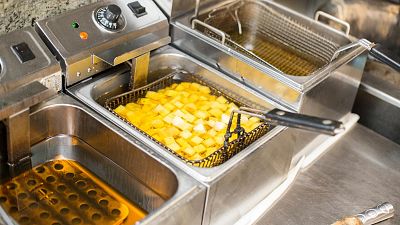 We’ve all heard stories about cooking oil being used to power diesel engines. And although you may know someone who does it in secret, it’s been illegal in France until now.

Last week France's parliament voted on a €20 billion package in response to rising inflation and potential energy shortages this winter.

Although the bills still need to pass through the Senate, one of them will allow and endorse the possible usage of frying oil as fuel for vehicles.

According to the ecologists who pushed for the bill, "while diesel exceeds two euros per litre at the pump", using used oil as a fuel "provides immediate relief for the French people's wallets and limits pollution from diesel engines".

Can I power my car with cooking oil?

The key thing to note is that you can’t just take oil straight from your fryer and pour it into your car.

And if you’re thinking of using unused cooking oil straight from the bottle, think again, it’s far too viscous and can cause problems for your engine.

Used oil needs to be collected, filtered and processed before it is mixed with traditional diesel to be used as fuel.

The authorisation is the result of an amendment tabled by MP Julien Bayou, secretary of the French Green Party. According to the MP's written arguments, ten litres of correctly reprocessed waste oil can give nine litres of fuel.

It’s also thought to emit up to 90 per cent less greenhouse gases than conventional diesel.

Is anywhere already powering their vehicles with cooking oil?

Though it is currently illegal in France to use cooking oil as fuel, there have been a few exceptions.

Béthune-Bruay, a town in Pas-de-Calais has been powering its fleet of 78 rubbish collection trucks with a fuel made from local recycled cooking oil since 2019.

The town teamed up with Gecco, a waste disposal company led by Michel Millares, which focuses on transforming food industry waste into local and renewable energy sources.

Meanwhile, a group called Roule Ma Frite which has local factions across France, collects and distributes cooking oil based fuel to its members. It has long been campaigning for change on a governmental level.

Meanwhile in the UK, it is legal to power your car with cooking oil based bio-diesels. However if you use more than 2,500 litres per year which hasn’t had duty paid on it, you will need to declare this to the tax office.

Watch the video above to learn more about using cooking oil as fuel.