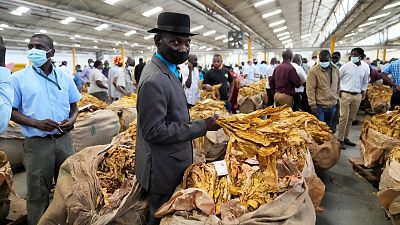 Dressed in a thick brown jacket and wearing a traditional blue headwrap, 54-year-old Spiwe Juru sits on the floor sifting through tobacco leaves at her farm in Nyazura, in Zimbabwe’s Manicaland province.

This is Juru’s busiest day in winter as she sorts tobacco leaves based on their colour and quality, before taking the “golden leaf” for sale at the auction floors, a venue for tobacco trading, in the capital of Harare.

For tobacco leaves to turn from green to yellow, small-scale farmer Juru uses firewood to burn them in homemade barns in a process known as curing, which removes moisture from tobacco using controlled temperatures over several weeks.

For every kilogram of tobacco, about 10 kg of wood is used in the curing process. “Each year I use firewood from the forests to cure tobacco,” says Juru, with a glowing face.

She has supported, clothed and fed six children with tobacco farming, and today sits in a makeshift grading shelter made of pole and dagga, with two helpers including her husband.

The government’s aim to grow the tobacco industry

Tobacco is one of the biggest foreign currency earners in Zimbabwe, alongside gold and money sent back from the diaspora. In 2021, it earned the country around $1.2 billion (€1.17bn).

The southern African nation, which is the largest producer of tobacco in Africa and the sixth biggest globally, is aiming to turn tobacco farming into a $5 billion (€4.85bn) industry by 2025.

This growing tobacco industry is sending Zimbabwe’s forests up in smoke.

But this growing tobacco industry is sending Zimbabwe’s forests up in smoke. Tobacco farming is responsible for ravaging 60,000 hectares of forests each year, show statistics from the Forestry Commission of Zimbabwe (FCZ), the state organisation tasked with the regulation, management and conservation of forests.

That equates to around 20 percent of the country’s total forest loss of 262,000 hectares per year.

Globally, around 3.5 million hectares of land are destroyed for tobacco cultivation every year. 90 percent of this land is in the developing world, where countries are prey to intensive tobacco industry interference and marketing tactics, according to a new report from the World Health Organisation.

The situation is spiralling despite Zimbabwe ratifying the United Nations Convention to Combat Desertification (UNCCD) in 1997. In 2005, the FCZ launched an initiative called Tobacco Wood Energy Programme (TWEP), working with smallholder farmers to establish woodlots for firewood that they can use to cure tobacco.

But to date deforestation from tobacco farming remains a huge problem.

How do tobacco farmers fuel deforestation?

Zimbabwe’s tobacco industry is dominated by smallholder farmers, as they contribute more than 50 percent of the country’s yearly tobacco produce. Violet Makoto, a spokesperson for the FCZ, says the issue of tobacco farming in the country is troubling because it is being done in an unsustainable manner.

“We are looking at the amount of fuel wood that is required in the production of tobacco,” she says. “That is causing a lot of deforestation in the country.”

Makoto says approximately 85 percent of tobacco growers are smallholders, who use less than two hectares of land for growing the crop. This means they rely entirely on fuel wood for tobacco curing as their land is so small that they cannot grow trees to use instead.

“This is resulting in extensive deforestation,” she says.

Fast-growing trees are an alternative for tobacco farmers

Since 2015, tobacco farmers have had to pay a levy from their sales which are supposed to go towards reforestation. The levy is collected by the Tobacco Industry and Marketing Board (TIMB), channelled to the Reserve Bank of Zimbabwe and then distributed to the FCZ.

The Commission uses this fund to expand its nursery operations, propagating fast-growing species of trees which it gives to tobacco farmers. Makoto says the idea is to encourage farmers to set aside a piece of land for a woodlot of trees like eucalyptus, which can be used for tobacco curing.

The advantage with these fast-growing trees is that they are ‘renewable’ by nature, regenerating faster than indigenous trees which are slow-growing and harder to cultivate.

Chelesani Moyo, public affairs officer at TIMB, says tobacco growers are also encouraged to use barns that require less wood. “TIMB is doing awareness campaigns across all regions to curb deforestation,” he says.

Moyo adds that TIMB is undertaking a project with the Sustainable Afforestation Association (SAA) to establish woodlots for all tobacco growers. To date, 150 hectares have been planted in Manicaland, with a similar coverage planned for the Mashonaland East and West provinces.

“Every tobacco grower is encouraged to establish a woodlot on their land. At least 0.3 hectares of wood per hectare of tobacco grown,” he says. “Willing farmers get tree seedlings for free.”

But farmers have little land on which to grow the trees

The scheme suffers from being uneven, however. Laura Mlambo, monitoring and evaluation officer at Environment Africa, says a lack of enforcement means national programmes like ‘tree planting day’ are not being implemented throughout the country.

“Some farming areas are being left behind. Some farmers are smallholder farmers who do not have enough land to grow trees,” she says. “They end up just cutting down trees without growing any.”

Juru, who grew tobacco on a one-hectare piece of land in the last farming season, says she does not have an extra piece of land to establish a woodlot where she can get firewood to cure the golden leaf.

Another small-scale farmer, Peter Notice says he uses timber and indigenous trees to cure tobacco. “I am on contract farming. So, as part of the company’s support, they deliver timber for me to use. But at times I use indigenous trees,” he says.

Until a truly fair and sustainable way is found to cure tobacco, the industry remains a major issue for stakeholders in the country and an ongoing threat to Zimbabwe’s forests.

“If I can get something sustainable to cure tobacco, I am willing to try it,” says Juru.