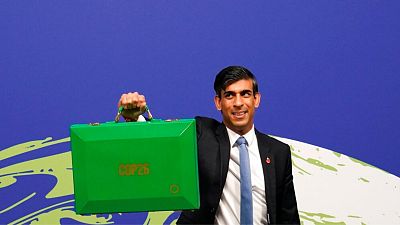 With many world leaders now making their way back from COP26, "the eyes of the world" are on negotiators who are working out the details of the climate commitments made over the last two days.

And on day three, the focus of the summit was finance.

Here are the biggest takeaways from the third day of the UN Climate Conference:

To that end, he said British financial institutions would be required to disclose their climate impacts -- but he won't make going net-zero mandatory.

As home to the City of London, one of the world’s major financial centres, the UK “has a responsibility to lead the way” in financing efforts to fight global warming, said Sunak.

Sunak also welcomed "historic" climate commitments from private companies that cover $130 trillion (€112.16 trillion) of financial assets. Known as the Glasgow Financial Alliance for Net Zero or GFanz, it covers more than 450 firms based in 45 countries across six continents and from all parts of the financial industry.

Make no mistake: the ? is now there if the ? truly wants to arrest the #climatecrisis

Today, through the Glasgow Financial Alliance for Net Zero #GFANZ, over $130 trillion of capital from 450+ firms across 45 countries is committed to transforming the economy #COP26

To guard against greenwashing, Gfanz will form its plans using "the most rigorous science-based scenarios". To check in on its climate progress there will be an advisory panel that is made up of 20 independent experts and seven NGOs.

The UK Government says that this "huge pool of cash" could fund the transition to net-zero emissions including a move away from coal, the shift to electric cars and the planting of more trees.

3. Environmental groups say finance plan has too much 'wiggle room'

Climate campaigners say this means a net-zero financial centre could just be business as usual with a flashy marketing slogan.

"The world’s first net-zero aligned financial centre would be one in which financial institutions and companies are required by law at the outset to bring their lending and investments in line with the global goal to limit warming to 1.5 degrees," says Greenpeace UK's head of politics Rebecca Newsom.

"Instead, these new rules seem to allow plenty of wiggle room for financial institutions to continue with business as usual, rather than ‘rewiring’ the system as the Chancellor claims."

She says that transition pathways must be science-based and not determined by "industry participants in cosy alliances."

"The Chancellor is once again falling short of what the climate emergency requires."

Developed countries have once again reiterated their pledge to provide climate funding for those most vulnerable.

"While we know we are not yet meeting it soon enough, we will work closely with developing countries to do more and to reach the target sooner," he added.

Sunak also said that the UK will commit £100 million (€118 million) to the Task Force on Access to Climate Finance. He added that this is meant to make it "quicker and easier for developing countries to access the finance they need."

5. Funding is there, but can those who need money get it?

Members of the Least Developed Countries (LDC) Group told COP26 today that with climate change and the COVID-19 pandemic, access to funding was a "huge issue".

"For us, it takes anywhere between four to five years to secure a loan," said Sonam P Wangdi, chair of the group.

Made up of 46 countries with 1 billion people, LDCs are responsible for less than 1 per cent of the world's emissions. Yet they suffer disproportionally from the effects of climate change.

From the LDCs perspective, Wangdi believes the process needs to be simplified so that money can be more easily accessed in an emergency.

"If you have a climate disaster and you apply for a loan, it takes four or five years, it doesn't make sense. You're not able to help your people, you aren't able to finance a rebuild or secure livelihoods.

"We end up borrowing and most of the LDCs are now getting into debt traps. We have borrowed up to the eyeballs."