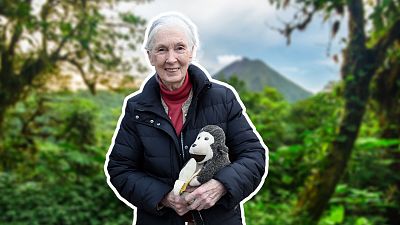 Celebrities are being encouraged to stop sharing photographs of themselves with primates to help safeguard the animals.

A new set of best practice guidelines from the International Union for Conservation of Nature (IUCN) cautions celebrity scientists and primatologists against posing for selfies with monkeys. The concern is that showing people, even experts in their fields, interacting with the species is fuelling the illegal pet trade industry.

Experts are concerned that by showing humans interacting with vulnerable species, it undermines their endangered status and encourages members of the public to both attempt to take selfies with monkeys, or even try to own one as a pet.

The IUCN report says that though photos and videos can help by exposing “millions of people” to the subject of primate conservation and welfare, often the necessary context is lost.

“These mistaken conclusions can have unintended, negative consequences for primate welfare and conservation,” say the guidelines. “The potential for the dissemination of images without appropriate context is a particular concern on social media.”

The paper goes on to say that the images being shared can “distort public understandings of primates,” giving the false impression that the animals pose no threat to human health and are not in any way dangerous. The fear is that this misunderstanding is driving people towards wildlife black markets, as members of the public seek to illegally buy a monkey of their own.

How has the media shaped our understanding of primates?

A study in 2011 found that the widespread use of chimpanzees in films, commercials and print advertising was contributing to an inappropriate understanding of the animals’ true nature.

The paper, published in the scientific journal PLOS One, found that viewers who were exposed to commercials which featured chimpanzees had a worse understanding of the species’ endangered status and their unsuitability as pets.

“These results firmly support the hypothesis that use of entertainment chimpanzees in the popular media negatively distorts the public’s perception and hinders chimpanzee conservation efforts,” the authors wrote.

Where else has banned animal selfies?

The IUCN guidelines say that photographs should include a physical barrier, with at least seven metres distance between animals and humans. But this isn’t the first time advice like this has been issued.

The Costa Rican tourist board and government launched the Stop Animal Selfies campaign in 2019. It came after the country was found to be the seventh worst in the world for selfies with wild animals in a report by World Animal Protection.

The campaign aims to raise awareness among tourists about the cruelty of selfies with wild animals, asking visitors to only take photos with free animals which are at a safe distance. The scheme was promoted at Costa Rica’s international airport, where tourists were invited to take photos with stuffed toys to help promote the message further.

“Everybody wants to have a picture, if they do have the possibility to observe an animal, but we have to do it with ethical practices,” explains Jeldryn Vargas of Swiss Travel Costa Rica, one of the agencies behind the campaign, “so the idea is to teach tourists how to do it.

“A good selfie with animals is at a safe distance from the animal, carried out with silent and respectful observation.”