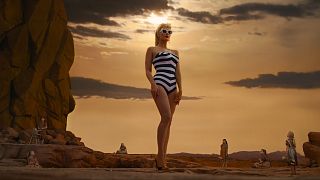 “Since the beginning of time. Since the first little girl ever existed. There have been… dolls.”

The first teaser trailer for what is doubtlessly going to be your favourite film of 2023: Barbie.

Directed by Greta Gerwig (Lady Bird, Little Women) and starring Margot Robbie as the iconic doll and Ryan Gosling as her slick beau Ken, the briefest of looks at what the film will look like promises much: an eye-catching and significantly weirder take on the ubiquitous doll from Mattel than anyone could have expected.

They’ve even found a way to pay homage to Stanley Kubrick’s 1968 classic 2001: A Space Odyssey, with children destroying their Barbie dolls after basking in the glow of a huge Margot Robbie, who stands in for the mysterious Kubrickian monolith. The trailer perfectly features that iconic bone-spacecraft match cut too…

And count the Kubrick estate in, as they’ve taken note of the teaser and noted: “They say imitation is the sincerest form of flattery!”

Fans have also given their seal of approval:

“Sneaking into the Avatar movie to watch the Barbie teaser just to walk out and go to Bones & All.”

While there’s no way of saying exactly what the Barbie movie will be about, we do know that Will Ferrell will play the CEO of Mattel, that some members of the massive ensemble cast - featuring Simu Liu (Shang-Chi and the Legend of the Ten Rings), Kate McKinnon (Saturday Night Live), Kingsley Ben-Adir (One Night in Miami), Issa Rae (The Hate U Give), America Ferrera (Ulgy Betty) and Emma Mackey (Emily), will be playing other versions of Barbie and Ken, and that the plot may centre around Barbie’s life once she escapes Barbieland and heads into the real world.

A go-for-broke, self-aware and colourfully campy comedy with echoes of The Lego Movie and Enchanted?

When can we inject this into our eyeballs with haste?

Barbie opens in theaters on 21 July 2023 – currently on the same day as Christopher Nolan’s next film, Oppenheimer.

Biopic on the architect of the atomic bomb or the blond bombshell? You know which queue to find us in. And whatever else happens in the film, the trailer has wonderfully subverted expectations and has made Barbie our most anticipated film of next year.