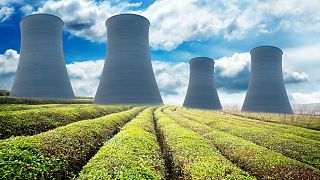 Alongside new commitments to renewable energy, British Prime Minister Boris Johnson recently announced that he wants nuclear power to provide 25 per cent of the country’s electricity by 2050.

The development of a new generation of nuclear power will ensure its rapid expansion, he says, as a “clean, reliable and safe energy source”.

So what is driving the UK’s push for nuclear?

Nuclear energy plays an important part in the UK’s plans to ensure energy independence - particularly from Russian natural gas, according to a Dept. for Business, Energy and Industrial Strategy spokesperson.

“In light of high global gas prices and Russia’s illegal invasion of Ukraine, we need to ensure Britain’s future energy supply is bolstered by reliable, affordable power that is generated in this country,” they say.

“New nuclear will not only provide this, but will also create high-quality jobs and drive economic growth.”

To meet its target of 'net zero' by 2050, Britain urgently needs to move away from fossil fuels.

And many climate scientists and international organisations argue that a global shift towards nuclear power is essential to tackle the climate emergency and meet increasing energy demands.

In contrast to fossil fuels, a nuclear plant does not directly release carbon in its operation. It is also unaffected by external climatic factors, such as cold snaps or very light winds, therefore creating a reliable energy output.

Adrian Bull, BNFL chair in Nuclear Energy Systems at The University of Manchester’s Dalton Nuclear Institute is a firm supporter of nuclear.

"Reaching Net Zero UK emissions by 2050 will be a huge challenge, and we’ll need every form of low carbon generation we can muster. Nuclear – the only proven and practical way of delivering vast quantities of low carbon power 24/7 in the UK – must have a role to play alongside wind, solar, tidal and other renewable options,” he tells Euronews Green.

“The role of advanced reactors providing heat for hydrogen and other uses, as well as electricity, is also vitally important. The steps being taken now would have been better a decade or more ago, but we can still reach Net Zero if we move fast!"

Currently, 16 per cent of the UK’s electricity is generated from its six nuclear power reactors, but by the end of this decade only one will still be producing power.

Therefore, plans to pursue the expansion of the country’s nuclear energy sector are a huge turnaround for the industry.

But nuclear energy is a divisive issue

Although described by the United Nations’ International Atomic Energy Agency as among “the safest and most secure facilities in the world”, Chernobyl, Windscale, Three Mile Island and Fukushima have shown that malfunctions can be catastrophic.

Radioactive materials can persist for many thousands of years and, when released into the environment, contaminate everything from the air, water and soil, humans, animals and plants.

35 years after the nuclear disaster at Chernobyl, and just outside the 30 mile radius exclusion zone, high levels of radioactivity are still found in grain, meat, dairy products and many trees. Traces of radiation have also been found 200 miles from the exclusion site, which may remain uninhabitable for years to come.

High level radioactive waste is produced in a facility’s day-to-day operations can remain hazardous for thousands of years.

Even in the absence of any accident, high level radioactive waste is produced in a facility’s day-to-day operations which can remain hazardous for thousands of years.

Nearly 350,000 tonnes is in temporary storage around the world, with some canisters already showing signs of deterioration.

Which countries have succeeded at disposing of nuclear waste safely?

The UK, like many other countries, favours “deep geological disposal” as the preferred solution for final disposal of the most radioactive waste but, as yet, has not found a community willing to host the £12bn (€14.1bn) facility.

So far only Finland has managed to implement this plan, creating around 100 nuclear waste disposal tunnels at depths of over 400 metres, to keep the waste isolated for the required 100,000 years. But, according to former Director of Research for the Geological Survey of Finland, Matti Saarnisto, freezing temperatures during the next ice age could lead to damage of this storage facility.

Nuclear reactors require huge amounts of water, so are built on the coast or near lakes. Dr Paul Dorfman, head of the UK’s Nuclear Consulting Group, says this has given rise to new risks.

Nuclear reactors require huge amounts of water, so are built on the coast or near lakes. This has given rise to new risks.

"With extreme weather events today becoming the norm in the future, existing risk mitigation measures become increasingly obsolete. The corollary to this analysis is that present and planned UK coastal nuclear installations will be at significant risk,” says Dr Dorfman.

“Nuclear’s lower-carbon electricity unique selling point, sits in the context of the much larger picture – that UK coastal nuclear will be one of the first, and most significant, casualties to ramping climate impact. UK nuclear is quite literally on the front-line of climate change – and not in a good way.”

But the Nuclear Industry Association UK, claims that “no industry generates higher quality, more skilled and more secure jobs than the nuclear industry”.

More than 60,000 people across the country are employed in the civil nuclear sector, operating current power stations, decommissioning old ones and building new ones.

Decommissioning is an extremely complex, lengthy, and costly process. The Nuclear Decommissioning Authority estimates it will cost British taxpayers over £130bn (€153.5bn) to decommission its civil nuclear sites and take around 120 years before these old sites are clean enough to be released for unrestricted use.

In the case of Sellafield and Dounreay, extensive contamination means this will never be possible.

What is the role of renewables in the UK?

Although nuclear power is often touted as the best way to tackle climate change, scientists like Dr Dorfman don’t believe that to be true.

He thinks the energy transition can and will take place using renewables like solar, wind and waves alone.

Due to technological advances, renewables are now a reliable energy source, even in times of low power input. Several countries, including Iceland and Norway, are already producing more than 90 per cent using these, and global renewable electricity capacity is forecast to increase dramatically by 2026.

This is equivalent to the current global power capacity of fossil fuels and nuclear combined.

Critics also claim time and costs involved with nuclear make it unviable. It can take up to 10-15 years plus, from planning to construction, and we need to act now, to prevent a climate emergency.

Renewables cost one fifth of new nuclear to build.

Renewables cost one fifth of new nuclear to build - since 2009, costs for utility-scale solar have dropped by 90 per cent, and wind by 70 per cent, while nuclear has increased by over 30 per cent.