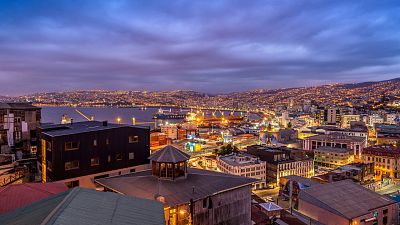 75 people, including around 50 school children, were poisoned on Tuesday by sulphur dioxide released in central-western Chile.

An environmental emergency has been declared in the area as heavy industry is to blame for the toxic fumes.

The towns of Quintero and Puchuncavi, located north of Valparaiso, have been dubbed the "Chilean Chernobyl" by Greenpeace and are home to mining, oil, cement, gas and chemical companies.

Headaches, itchy eyes, throat and nausea are just some of the symptoms the victims experienced.

"50 children and 25 educational assistants were affected by the effects of toxic gases," said a statement from the municipality of Quintero.

But under observation, they were able to leave the hospital.

"We had a sulphur dioxide peak that exceeded five times the hourly norm. Quintero and Puchuncavi have tolerated this for decades, but it has to stop," said Rubén Gutiérrez, the mayor of Quintero, which has 31,000 inhabitants and is 120 km west of Santiago.

As authorities declare an environmental emergency in these two locations, classes have been suspended, physical activity prohibited and all sources of heating have been banned too while temperatures cool down.

What is sulphur dioxide and why is it so harmful?

Sulphur dioxide, a source of pollution linked to fossil fuels, is one of the so-called 'classic air pollutants' along with particulate matter, ozone, nitrogen dioxide and carbon monoxide.

Inhalation of sulphur dioxide can cause a severe respiratory reaction. At high concentrations it can cause a life-threatening accumulation of fluid in the lungs.

In the 50,000-strong Chilean town, pollution initially increased in the when the government converted it into an industrial centre in 1958 - and it now houses four coal-fired power stations and oil and copper refineries.

The governor of Valparaiso, Rodrigo Mundaca, is calling for "responsibilities to be clarified, because polluting cannot be free and mortgaging the lives of children cannot be either".