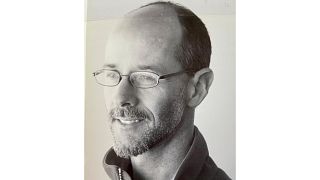 This undated photo provided by Jeffry Buechler shows Wynn Bruce in Longmont, Colorado, US.   -   Copyright  Jeffry Buechler via AP
The opinions expressed in this article are those of the author and do not represent in any way the editorial position of Euronews.
By Rupert Read  •  Updated: 10/05/2022

Dr Rupert Read, a freelance journalist and author, explores the historic and religious context of Wynn Alan Bruce's death, sharing his perspective on using every day in a time of climate catastrophe.

“Last year I was approached by a young man who had taken the decision to immolate himself in order to awaken us to the destruction of our planetary life-support system.

I told him it would not work. The media would ignore his message and say he was depressed or deranged.”

This was the advice Brother Phap Linh, a senior Buddhist monk, gave to a Buddhist practitioner who came to him because he was contemplating setting himself on fire to draw attention to the climate crisis.

What happened to Wynn Alan Bruce?

Climate activist Wynn Alan Bruce did, however, take this step.

On Earth Day this year, Wynn Alan Bruce was, according to family and friends, driven to an unthinkable act. The most extraordinary measure - self-immolating outside the US Supreme Court because of his deep concern over the escalating climate crisis.

The 50-year-old left no note, no manifesto, but it is known that he cared deeply about the environment posting on social media about the importance of clean air and the global impact of climate change.

The teachings of Thich Nhat Hanh

He was also a follower of Thich Nhat Hanh, one of Buddhism’s greatest teachers in recent times.

It was Zen Master Thich Nhat Hanh who, long ago now, explained to the West why Buddhists were burning themselves to death due to what we call ‘the Vietnam War’ - what I learnt on a trip to Vietnam is known there as the ‘American War’.

“The press spoke then of suicide, but in the essence, it is not. It is not even a protest,” he wrote in a 1965 letter to civil rights activist Rev Dr Martin Luther King Jr.

The press spoke then of suicide, but in the essence, it is not. It is not even a protest.

“What the monks said in the letters they left before burning themselves aimed only at alarming, at moving the hearts of the oppressors, and at calling the attention of the world to the suffering endured then by the Vietnamese.

“There is nothing more painful than burning oneself. To say something while experiencing this kind of pain is to say it with utmost courage, frankness, determination, and sincerity.”

Understanding in light of tradition

Those self-burnings of monks back in the 1960s were the very first thing I ever learnt about Buddhism. Wynn’s self-immolation can surely only be understood in the light of this tradition of practitioners sometimes, when their sense of purpose is sufficiently unshakable, undertaking such ultimate sacrifice.

However, after speaking to another monk, I also wonder if Wynn’s story might have had a different ending, had he talked about his plan beforehand. Friends and fellow members of the Buddhist community in Boulder, Colorado said in a statement that had they known they “would have stopped him in any way possible.”

“That would be our spiritual, moral and legal responsibility,” they wrote. But, just like everyone else, they are still trying to figure out what happened.

When the news of his death came through, it resonated because I have spent parts of the last month at Plum Village in France.

This beautiful, peaceful place in the Dordogne was the first monastic community founded by Thich Nhat Hanh in the West and his spiritual centre. He was a teacher of mine, until his recent death from old age.

It was from here that I spoke to Brother Phap Linh, a senior monk at Plum Village who I first met at COP26 in Glasgow. He told me he was approached by a Buddhist practitioner, perhaps at about the same time as Wynn Bruce was planning what he did, to ask for advice.

Brother Phap Linh begged him to come to Plum Village first in order to meditate and reflect.

“I also suggested that at this point, perhaps the more courageous thing to do is to stay alive and use every single day to try to bring about that same awakening. He is still alive,” Linh added.

Perhaps the more courageous thing to do is to stay alive and use every single day to try to bring about that same awakening.

This wasn’t said in judgment of Wynn, far from it. It does however evoke another possible path.

With every new heat-dome or superstorm, every raging wildfire or video of collapsing ice, more and more people are catching on to the dire circumstances we find ourselves in. They are struggling with how to manage their grief when they discover we are not doing anywhere near enough to save us and future generations. We are all called to stop the world from burning.

But while death was Wynn’s choice, perhaps he should inspire the rest of us to live, to carry on struggling. Undertaking the difficult work of staying alive and giving our lives purpose, at this great and terrible moment in the history of our species.