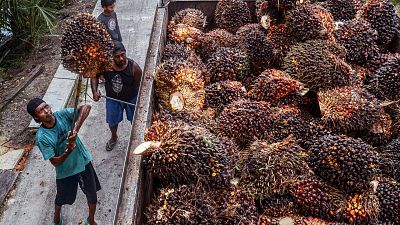 Indonesia, the world’s biggest palm oil producer, has announced a surprise ban on exports of the product starting on 28 April.

“I will monitor and evaluate the implementation of this policy so availability of cooking oil in the domestic market becomes abundant with affordable prices,” Widodo said in a statement.

The ban comes as the price of cooking oils has surged dramatically in the last couple of months. Drought in South America and Canada has impacted crops of soybeans and canola, but buyers hoped that a bumper crop of sunflower oil from Ukraine could help.

These supplies are now uncertain due to the Russian invasion.

This combination of crises has led the cost of vegetable oils to increase by more than 50 per cent over the last six months - and manufacturers have turned to palm oil as an alternative for everything from cosmetics to cakes.

Minister for economic affairs Airlangga Hartarto has said that Indonesia’s export ban will remain in place until the price of bulk cooking oil in Indonesia returns to 14,000 rupiah (€0.92) per litre.

With Indonesia producing around 60 per cent of the global supply and prices at an all-time high, more and more palm oil is being sold overseas.

But now there are shortages at home - where it is the dominant vegetable oil used in cooking - for consumers already hit by an increase in food and fuel costs.

The government has so far tried subsidies on bulk amounts of oil and price caps to try and help consumers cope. People queued for hours for the chance to get cooking oil at an affordable price with lines turning deadly in the heat of the sun.

There have been mixed responses to the ban from producers. The Indonesian Farmers Union (SPI) has said that, with the domestic market flooded, prices for small farmers who grow the fruit it is made from could be driven down.

Indonesia’s Oil Palm Farmers Union (SPKS), however, supports the government's ban on exporting palm oil. It believes that this temporary ban is needed with companies “forgetting their duties to fulfil domestic needs.”

“We believe in measures taken by the president to ensure domestic supply of cooking oil,” secretary general of SPKS Mansuetus Darto said in a statement.

Four major conglomerate companies control nearly half of the domestic market, owning businesses at every stage in the production process, from plantations to refineries. This means they can dictate the market, Darto explained, prioritising exports when cooking oil is in short supply in Indonesia.

He added that oil palm farmers’ unions need to be strengthened in order to prevent these big companies from calling the shots.