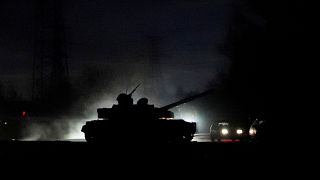 As Russia's invasion of Ukraine tragically unfolds in front of our eyes, some Ukrainians are asking: does Europe have blood on its hands?

In a letter written by XR Ukraine members, the group argues that Putin's invasion of Ukraine has been funded in part by EU money.

"When Europe is so dependent on these fossil fuels from Russia, it gives him a lot of money. And you see this money has now been spent on transporting troops from Russia to Ukraine's borders."

How much of Europe's energy comes from Russia?

The European Union heavily relies on imports from Russia to meet its energy needs. In 2019, the EU Commission estimated that more than half of the EU’s energy needs were met thanks to external supplies - most of which were coming from Russia.

And the money paid for these fossil fuel supplies - billions of euros - kept feeding the Kremlin's finances, says XR Ukraine.

The group claims those funds supported Russia’s invasion of Georgia in 2008, Moscow’s aid to Assad’s regime in Syria in 2011, the invasion and subsequent annexation of Crimea in 2014, and now the war in Ukraine.

It's with that money that Putin is also financing the brutal police repression of protests against the invasion of Ukraine in Russia, and funding the regime's digital and print propaganda around Moscow’s pretext for attacking its neighbour, the group’s letter says.

A "massive" package of measures was announced by the EU earlier this week as punishment for the invasion of Ukraine. But this package had a notable exemption - Russia's energy exports. It means that banks will still make money from oil and gas sales.

Countries that are highly dependent on Russian natural gas, including Germany and Italy, reportedly opposed measures including barring them from SWIFT - the world's most-used interbank communications system.

Countries use SWIFT to pay for Russian gas and, if the EU were to take such steps, "there is a high risk that Germany will no longer be supplied with gas or raw materials,” German finance minister Christian Linder said on ARD television.

Former head of the European Council Donald Tusk said on Friday that states blocking tougher sanctions had "disgraced themselves".

"In this war everything is real: Putin’s madness and cruelty, Ukrainian victims, bombs falling on Kyiv. Only your sanctions are pretended," Tusk tweeted.

Who is behind the letter?

XR Ukraine was founded in late 2019, one of many groups set up following the founding of Extinction Rebellion in the UK.

The Ukraine group is smaller than other chapters. "We are 5 to 6 core members, and then more people join during actions [XR’s name for protests and other events]," explains Sergiy.

"Protesting in Ukraine with elements of civil disobedience is not the same as protesting in the UK," he says. "I would say it’s more dangerous, and it’s not common in Ukraine."

Sergiy and fellow XR Ukraine members wrote the letter on Wednesday 24 February and sent it to other XR groups. Their idea was that while they can't protest while the country is under martial law, other activists around the world would.

"We absolutely cannot do it in Ukraine, right now. This is why we’re asking the rest of Europe," says Sergiy. "Go to Gazprom's main offices and block them as you blocked the roads in London during the Insulate Britain movement."

"If you're willing to take a proactive stance in defending Ukraine, go there and show your support, block these offices," he adds.

What does XR Ukraine want?

The invasion of Ukraine should be a wake-up call for Europe and the world, the group says, to realise that the transition from fossil fuels to green energy can’t wait. Not only for the sake of the planet but also to stop the funding of authoritarian governments around the world, which often rely on these exports to stay in power.

They say that if Europe had transitioned to renewable energy, the continent could have freed itself of its reliance on Russian fossil fuels, taking billions away from the Kremlin.

Radical reforms aimed at achieving carbon neutrality in Europe is the only way, argues the group, to stop these "two potentially planet-killing threats" - Putin's Russia and the climate crisis - "from taking away from us the peace and justice we strive for."

Refugee pets are being rescued by this amazing team of volunteers