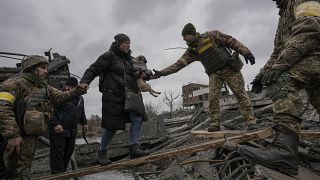 As refugees continue to cross into Poland from Ukraine, a German organisation has set up a shelter for pets stranded in the chaos of war.

Volunteers are trying to comfort terrified dogs in a makeshift shelter in the small Polish village of Medyka on the southern border with Ukraine.

The pets, many of them left behind by refugees who had no choice - are in need of medical care, food and attention. One of the volunteers from Denmark Sonja Mortensen-Dissing says many owners have left letters with their dogs expressing hope to one day reunite with their pets.

She explains with tears in her eyes, that "the situation is very hard."

Mortensen-Dissing came with Sasha Winkler, a 35-year-old from the Winkler Aktiv organisation from Chemnitz, Germany. He explains that the shelter is looking after animals left behind as well as street dogs from the war zone.

The organisation is also gathering aid to take to some of Ukraine's bigger cities. From there, it is helping to organise people who can drive to smaller areas affected by war and deliver food for the animals.

"We have to pick up at different places different things", says Winkler. "Mostly dog food and cat food, because directly in the war zones there is none of this, 100 kilometres around there is nobody to bring them food."

According to Winkler Aktiv's Instagram account, a team of volunteers is currently travelling to Kyiv having rescued almost 50 animals from an abandoned shelter 300km from the Poland-Ukraine border on their way.

Watch the video above to learn more about this mission.

Europe cuts Russian gas imports: So what are the energy alternatives?