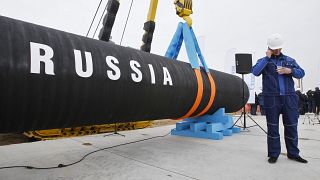 A Russian construction worker at a ceremony marking the start of the Nord Stream pipeline, St. Petersburg, Russia.   -  Copyright  Dmitry Lovetsky/Copyright 2019 The Associated Press. All rights reserved.
By Euronews  with Reuters  •  Updated: 30/03/2022

European gas prices have soared as Russia launches a military operation in Ukraine.

Air raid sirens sounded in the Ukrainian capital of Kyiv last week as President Vladimir Putin ordered an attack on several cities - with missiles and troops sent into the country.

Videos captured by eyewitnesses show long queues of cars at petrol stations across the country amid the sounds of explosions.

The United States announced on Wednesday that the US would impose sanctions on the company in charge of building Russia’s Nord Stream 2 gas pipeline.

The sanctions, which target the Nord Stream 2 AG company and its corporate officers, add to pressure on the Baltic Sea project that was designed to double the gas flow capacity from Russia to Germany.

As Europe’s most divisive energy project, Nord Stream 2 has yet to begin operations pending certification by Germany and the European Union. This week, Germany halted the pipeline, worth $11bn (€9.8bn), citing Russia’s actions towards Ukraine.

Where else can Europe get its supplies from?

Europe relies on Russia for around 40 per cent of its natural gas. Most comes through pipelines including Yamal-Europe, which crosses Belarus and Poland to Germany, and Nord Stream 1, which goes directly to Germany, and via Ukraine.

Europe's gas markets are linked by a network of pipelines. Most countries have cut reliance on Russian gas over the years and there are also more supply routes that bypass Ukraine.

By last year Ukraine was a transit corridor largely for gas going into Slovakia, from where it continued to Austria and Italy.

Europe relies on Russia for around 40% of its natural gas.

Now that Russia has invaded Ukraine, this could impact flows through pipelines such as Yamal-Europe, Nord Stream 1 and TurkStream.

But even though sanctions have been imposed against Nord Stream 2, the European Commission said current European gas supply would not be affected since this pipeline is not yet operating.

Other possibilities are that Russia suspends sales of gas to Europe in retaliation for sanctions, or military conflict causes damage to one of the pipelines which cross Ukraine bringing gas to Europe, say analysts at the Oxford Institute for Energy Studies.

Some countries have other options. For example, Germany, the biggest consumer of Russian gas, can also import from Norway, the Netherlands, Britain and Denmark via pipelines.

But Norway, Europe's second largest supplier, is delivering natural gas at maximum capacity and can't replace any missing supplies from Russia, its prime minister has said.

Germany, the biggest consumer of Russian gas, can also import from Norway, the Netherlands, Britain and Denmark via pipelines.

Southern Europe can receive Azeri gas via the Trans Adriatic Pipeline to Italy and the Trans-Anatolian Natural Gas Pipeline (TANAP) through Turkey.

Neighbouring countries can transfer gas via interconnectors, but nations may be unwilling to part with gas they might need and importers would have to pay a high price.

Barclays analysts say fully replacing 150 billion-190 billion cubic metres (bcm) a year of Russian gas to the EU is not achievable in the short term.

They add that Russian winter gas deliveries to the EU will be around 48 billion cubic metres (bcm) at current run rates, down 30 per cent year-on-year.

The European Union wants to require countries to fill natural gas storage ahead of each winter, to help bolster stocks and cope with supply disruptions, according to a draft document seen by Reuters last week.

Russia has said it will continue to deliver uninterrupted natural gas supplies to world markets, in a letter to an energy conference in Doha.

"We do not think it likely that Russia would shut off gas supplies to Europe. Russia delivered gas to Europe through the Crimea crisis in 2014/15 after the imposition of selected sanctions in response, and at the height of the cold war," said Barclays analysts.

Liquefied natural gas (LNG) imports to north-west Europe, particularly from the United States, hit a record high of around 11 bcm in January. But Europe's LNG terminals have limited available capacity to absorb extra supply in the event gas from Russia is disrupted.

Qatar, one of the world's top LNG producers, has stated that neither it nor any other single country has the capacity to replace Russian gas supplies to Europe with LNG, as most volumes are tied to long-term contracts and have clear destination clauses.

However, Germany announced on Sunday that it plans to construct two liquefied natural gas (LNG) terminals. German Chancellor Olaf Scholz said he wants to do more to protect Germany’s energy supply, as the country looks to reduce its Russian gas dependence.

LNG is seen as an even cleaner version of natural gas. But according to climate experts, it's "cleaner but not clean" and won't avert climate disaster.

Until batteries or other forms of energy storage become cheaper and more accessible, natural gas should serve as a mere complement to renewables, they say.

What are the non-gas options?

Several nations have options to fill the gap with power imports via interconnectors from neighbours, or increased power generation from nuclear, renewables, hydropower or coal.

But nuclear availability is declining in Germany, Britain, Belgium and France due to ageing plants, decommissioning, phase-outs and frequent outages.

Under pressure to meet climate targets, several EU countries have shut down old coal-fired power plants or are not building new ones.

Several nations have options to fill the gap with nuclear, renewables, hydropower or coal.

Some countries retain coal plants for back-up supply. Europe has been switching to coal from gas since the middle of last year due to high gas prices.

In past crises, countries have introduced measures to reduce industrial production at certain times, pay back-up generators to switch on supply, order households to curtail energy use, or enforce temporary power cuts.

"Let's now dash into renewables at lightening speed... The faster we move, the sooner we reduce dependency on others," EU climate policy chief Frans Timmermans said in a tweet on Friday.

Has gas supply to Europe been disrupted before?

The past 15 years have seen several disputes between Russia and Ukraine over gas, mostly to do with prices paid.

In 2006, Gazprom cut off supplies to Ukraine for one day. In the winter of 2008-9, disruptions to Russian supply rippled across Europe. In 2014, Russia cut off supplies to Kyiv after annexing Crimea. Ukraine stopped buying Russian gas in November 2015.

Fortunately, Ukraine has reduced reliance on direct gas imports from Russia via a reverse flow mechanism, allowing it to import from EU countries.

A complete or prolonged halt would have severe economic repercussions, requiring emergency measures like factory closures.

The European Commission has said Europe could cope with a short-term disruption to Russian gas flows this time. But analysts say a complete or prolonged halt would have severe economic repercussions, requiring emergency measures like factory closures.