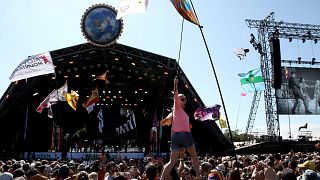 Festivals like Glastonbury in the UK can reduce their environmental impact and inspire fans to take action.   -   Copyright  Grant Pollard/Invision
The opinions expressed in this article are those of the author and do not represent in any way the editorial position of Euronews.
By Linda Adams  •  Updated: 14/02/2022

_Linda Adams is head of partnerships for climate action platform Ecologi. Here she shares her thoughts about how the music industry can lead the way on climate action and reduce its carbon emissions. _

When people think about the causes of climate change, the music industry may not receive as much criticism as other sectors which have a visible and highly publicised environmental impact.

We do not always see or hear about the impact music has on the planet - which means it is rarely part of the climate change conversation.

The world of music has started to recognise the importance of limiting the carbon emissions associated with the industry, however. Record labels and artists have joined together to tackle climate action by signing the Music Climate Pact.

Coldplay has announced their next tour will reduce carbon emissions by 50 per cent compared to their previous tour. Ed Sheeran has plans to rewild as much of the UK as possible.

Recent figures suggest that live music in the UK alone generates 405,000 tonnes of greenhouse gas emissions every year. That makes it a considerable contributor to climate change and highlights the need for more artists, and their fan bases, to follow suit.

Music is globally loved and culturally widespread, and is an important part of many people’s lives. It is therefore in the interest of all music fans to find more sustainable ways to continue to enjoy and experience music.

The music industry needs to assess the impact it is having on the planet and outline solutions to minimise the damage it is causing.

To tackle climate change effectively, artists need to actively work in collaboration with their record labels and other musicians. There must be a concerted effort within the industry to take action; it is not enough for a few artists to assume responsibility and operate alone.

Groups such as Music Declares Emergency already show that the industry is taking a step in the right direction, with artists standing together to declare a climate emergency.

Artists can also work with organisations to help offset their carbon emissions. Liam Payne, Passenger, and Palaye Royale for instance, are currently working with Ecologi to offset their CO2 emissions by supporting carbon reduction projects, as well as funding tree-planting projects.

Passenger recently took his carbon-reducing journey further, by ensuring his newest albums were all made of 100 per cent recycled material. Hannah Trigwell, another artist who has partnered with Ecologi, documented her carbon footprint from spending one day in the studio.

Artists can send a clear message to their fan bases while putting pressure on event organisers to meet expected environmental standards.

By making small choices like these, artists can significantly reduce their carbon footprint.

Musicians can also collaborate with event organisers to make more conscious decisions about the gigs and festivals they perform at. Choosing to play primarily at events that prioritise sustainability, artists send a clear message to their fan bases while putting pressure on event organisers to meet expected environmental standards.

One event that is already taking the necessary measures is Shambala Festival, which has removed meat from its on-site catering and will power this year’s event with 100 per cent renewable energy.

Coldplay, who refused to commence their next world tour until measures were put in place to ensure the reduction of emissions, represent the kind of power and influence artists can have if they take real action and force event organisers to keep up with their sustainability goals.

While it is important for artists to campaign and speak out about climate action, this is not enough to effect real change. They need to lead by example and commit to setting and meeting the requirements of their own climate initiatives.

Renewable energy can be used to power the lighting and sound systems involved in their onstage performances, ensure the tour routes are as efficient as possible, and work with organisers to provide low-emission public transport options for fans travelling to their concerts.

By centring their activities around sustainability, artists can pave the way for the entertainment industry to ensure its compatibility with the climate crisis. Through active campaigning as well as leading by example in their efforts, artists can also have an even broader impact by encouraging and enabling their fanbases to follow suit.

The most obvious solution might be to restrict and limit touring, and play virtual shows instead. Dua Lipa held a virtual concert whilst her tour was postponed during the pandemic and Travis Scott partnered with Fortnite to hold a virtual concert in the digital gaming world.

While these represent a novel solution to minimising emissions, they don’t replace the joy of experiencing music at a live concert. An answer to this could be a hybrid model whereby artists perform both virtual shows and live tour dates to minimise the impact of live touring emissions.

Warner Music Group, for instance, is in the process of creating a virtual concert venue within the metaverse, enabling performers to engage with fans remotely.

A love of music connects artists with their fans. This same dynamic can unite them in the collective fight against climate change.

Through their reach and influence on their fans, and by being proactive and taking real action, global artists can be at the forefront of the movement to combat climate change. Only through a concerted global effort, and a complete re-evaluation of the music industry’s approach to producing and performing, can the immediate and effective climate action needed take place.

A love of music connects artists with their fans. This same dynamic can unite them in the collective fight against climate change. By engaging with the issue, raising awareness, and holding one another to account artists and fans can have a real impact both within the music industry and on global culture.