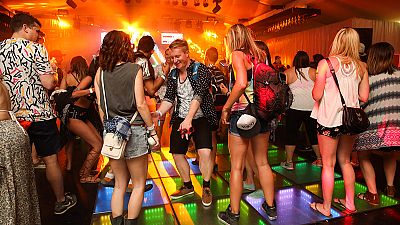 Two young men are at a nightclub in Rotterdam, the Netherlands. Surrounded by fluorescent lights and party goers, they are deep in conversation on the middle of the dance floor. But the pair aren’t there to have fun - they’re watching the dancers intently, musing on how they can harness this manpower to create energy.

That was back in 2006. Two years later they had created the first sustainable dance floor. By generating kinetic energy from footsteps into electricity, this was enough to power the LED lights in the floor of the nightclub.

“The power of this idea to convert the energy of the people, who are having a good time, into usable electricity sparked so much enthusiasm that our two founders made it a reality,” explains Michel Smit, CEO of Energy Floors.

Each floor tile can produce up to 35 watts of energy from people’s dance moves to power the venue’s digital system.

Elsewhere, a London-based company named Pavegen came up with a similar idea. But instead of dancing, it focused on our daily footsteps. Pedestrians step on electromagnetic generators under floor tiles, which harness their kinetic energy to produce clean electricity. Each step can create up to 4 joules of off-grid electrical energy.

Founder, Laurence Kemball-Cook tells Euronews Living that he believes in the “huge potential” of the product.

“The energy can be used for lighting, storage and eventually go back to the grid,” he says. The tiles feed the energy to a battery installed outside, when people step on them.

Pavegen has sold the tiles to different cities around the world, including Washington DC. The energy created from 10,000 people stepping on their tiles outside the White House, for example, was enough to power lights for about five hours.

Both companies say the power of this type of technology lies in the fact that it makes people more aware of environmental issues because we think about where we’re getting our energy from.

“The main role of kinetic energy in reducing carbon emissions is by raising awareness with the public. It makes them feel and understand what energy is, how much it takes to produce a certain amount, and how much we need for a certain purpose,” Smit adds.

A potentially positive and visible image for renewable energy production.

What about walking on solar panels?

Energy Floors has also launched solar panels that both adults and children can step on. The tiles come with a top layer of anti-slippery glass, while sensors below can connect the LED lights embedded with mobile applications. The energy has the ability to power other electrical devices too, such as mobile phone chargers, while the remaining energy is fed back to the grid.

Smit says this new product doesn’t employ kinetic energy, as it is powered by the sun, but it has proved to be even more efficient.

“We use kinetic energy conversion indoors and solar technology outdoors to create electricity. The use of kinetic energy outdoors has proven not to be efficient, as it requires more energy to manufacture and maintain than it can produce,” Smit explains.

“Solar also produces many times as much energy, up to 40 watts, as a kinetic tile that can generate only up to 2 watts in walking and 20 watts in dancing.”

Asked if this type of technology has more potential in the future, Smit believes the efficiency from turning dancing or walking into green power is almost fully developed. He is now seeking to reduce the cost of production and spread the use of the tiles, instead of further advancing the technology.

“It is more interesting to see how we can make it cheaper. This can certainly be realised when we can produce in larger volumes, and if more clients decide to integrate it into their projects.”

Is harnessing kinetic energy efficient in the long term?

Professor Chappin is an expert in energy use. He explains that it would take a lot of people stepping on these tiles to generate enough electricity for an average Dutch household for one day. It could therefore not be sustainable in the long term.

“It takes between 800 to 1,600 people, doing all their 10,000 daily steps on these floors, to produce the electricity for one day of an average Dutch household. Even if they improve quite a bit over time, this still means the actual electricity production is not significant in relation to what we typically consume… This limits the potential [of this type of tech] in relation to total electricity consumption,” he says.

Kemball-Cook also admits that there is a limit to the energy produced by human bodies.

“It would be impossible to power the world with human energy alone, even if every single human inhabitant sat on an exercise bike!”

However the founder is optimistic that this kind of innovation could light up a whole city, such as London, at night time. As smart cities are emerging around the world, Kemball-Cook remains confident that more and more urban planners will employ this type of technology.

“We are looking into generating kinetic energy from roads as well,” he says, reiterating his belief in the technology’s future potential.