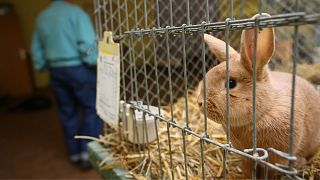 Testing cosmetics on animals is cruel and inhumane.   -   Copyright  Canva
The opinions expressed in this article are those of the author and do not represent in any way the editorial position of Euronews.
By Julia Baines  •  Updated: 03/03/2022

**Dr Julia Baines is Science Policy Manager at PETA. Here she gives us her take on why the EU ban on animal testing could be overturned and the impact that would have on innocent animals.
**

Europe’s ban on animal testing for cosmetics is at risk, and Sir Paul McCartney is stepping in to help.

The ex-Beatles frontman is adding his voice to the ‘Save Cruelty-Free Cosmetics European Citizens’ Initiative’ spearheaded by PETA and more than 100 other animal protection organisations. The aims is to mobilise 1 million European citizens to call on the European Commission to uphold and strengthen the ban on testing cosmetics ingredients on animals.

“We all thought the battle was over and that cosmetics tests on animals in Europe were a thing of the past, but sadly, that’s not the case. The European Chemicals Agency continues to demand the use of thousands of rabbits, rats, fish, and other animals in cosmetics ingredients tests,” says McCartney - a longtime vegetarian and animal advocate.

“But you can help put a stop to it. No animal should suffer for beauty,” he adds.

What are the rules on cosmetics testing in the EU?

Animal rights campaigners had worked for decades to end animal testing for cosmetics and, in 2009, a long-awaited EU-wide ban was introduced.

Four years later, a ban on the sale of goods tested on animals anywhere in the world was implemented, leading many to believe that the campaign for cruelty-free cosmetics was officially won.

But shamefully, even though the testing and marketing bans have been in force since 2013, animals are still suffering in thousands in laboratories today.

The vast majority of EU citizens oppose animal testing for cosmetics, and these undemocratic demands go against their wishes.

Under the EU chemicals regulation, the European Chemicals Agency (ECHA) is demanding new tests on animals for chemicals used exclusively as cosmetics ingredients. The rationale is that the tests are needed to demonstrate safety for workers who manufacture or handle the substances - yet many of these chemicals have been used safely for decades and are approved for use by consumers.

The vast majority of EU citizens oppose animal testing for cosmetics, and these undemocratic demands go against their wishes.

What exactly happens to animals in these tests?

Among other procedures, experimenters force-feed pregnant rabbits an ingredient before killing and dissecting them and their unborn babies. Alternatively, they may allow the offspring to be born, only to subject them to the same miserable fate as their mothers.

Experimenters force-feed pregnant rabbits an ingredient before killing and dissecting them and their unborn babies.

Rats used in inhalation tests are squeezed into narrow tubes in which they are immobilised and forced to inhale substances for hours on end – every day for weeks or months. Finally, experimenters kill and dissect them.

What is being done to these sentient beings under the guise of bureaucracy would be illegal in any other context, yet the animals suffer just as much whether at the hands of old-guard experimenters or sadistic animal abusers.

A European Citizens’ Initiative is a petition-like mechanism designed to enable EU citizens to participate in EU policies. When an initiative amasses more than 1 million signatures within 12 months, the European Commission will look to take action.

Firstly, it urges the EU to protect and strengthen existing cosmetics legislation to safeguard consumers, workers, and the environment without testing on animals. Secondly, it advocates for the transformation of EU chemicals regulations to ensure human health and the environment are protected without new requirements for animal tests. Finally, it calls on the Commission to commit to working towards animal-free science in all areas – not limited to cosmetics.

This is a clear, achievable roadmap.

Cutting-edge tools such as advanced computer simulations are used routinely today to assess the safety of cosmetics without harming a single animal.

Some of the animal tests required by law have not even been validated, meaning that their scientific basis, reliability, and relevance to humans have not been satisfactorily demonstrated. This, combined with significant biological differences between humans and the animals used in toxicity tests, adds up to unreliable results that risk failing to protect humans and the environment.

Advanced, animal-free research methods are available and developing all the time.

Cutting-edge tools such as three-dimensional tissue models and advanced computer simulations are used routinely today to assess the safety of cosmetics without harming a single animal. McCartney and the European Citizens’ Initiative are calling on the European Commission to act and to facilitate a transition to these methods of humane, human relevant science.